With the expanding Jeep lineup recently adding the subcompact Renegade, one might have thought the aged Compass’ was on its way out. Well not so fast, as Jeep has just released an all-new compact Compass, making for a two-pronged small  SUV attack from the brand. Plus, this Compass claims to have shed its “near Jeep” reputation. So is the new Compass for “real”? Let’s all be the judge of that.

If you thought there wasn’t enough room in the Jeep lineup for another crossover between the Renegade and the Cherokee, well you’re wrong, as that spot is now filled by the reborn 2017 Jeep Compass.

And while that might not exactly cause mass cheering around your workplace or ours, it will certainly create some buzz in plenty of the over 100 countries that it will be sold in.

The Compass still rides on a front-wheel-drive based chassis, though no longer the Dodge Caliber’s; rather, the Fiat derived Jeep Renegade’s. 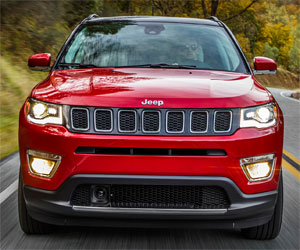 The Compass’ exterior design is without a doubt much more SUVish in appearance than the compact wagon of before; drawing more cues from the larger Grand Cherokee than chassis-mate Renegade.

The front end is still tall and chunky looking, with the shortened 7-slot grille stretching fully between the black-trimmed headlights. A black-painted roof is optional, as are LED tail lights.

And, for those Jeep Easter Eggs we’re not supposed to fully understand, there’s a lizard molded into the cowl, and a Loch Ness monster on the rear window.

We do understand FCA’s Tigershark 2.4-liter I4; our only engine choice for now. Here it produces 180-horsepower and 175 lb-ft. of torque. Walking up the trim levels will move you from 6-speed manual, to 6-speed automatic, and ultimately 9-speed auto.

The interior appears almost upscale, more so in Limited trim; with little Jeep quirkiness to be found. Front seat space is ample, made more so by a very low console for an almost airy feel.

Seat cushions felt firm initially; but after a long day in the saddle, they proved to be very comfortable.

Rear seat space is good on headroom, adequate on legroom, but the cushions are harder and flatter.

Even base models feature a UConnect touchscreen center dash, but upgrading to navigation gets you a much larger 8.5-inch version. 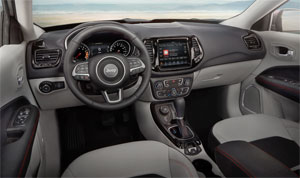 A handy power lift gate is optional. Behind it is a good 27.2 cu-ft. of cargo space. Split, nearly flat folding rear seats expand that to a respectable 59.8 cu-ft.

And that 9-speed still seems to be a powertrain weak link. It seldom felt like it was in the right gear at the right time, and was rather slow to make any changes.

We found the ride to be, somewhat surprisingly, very smooth, even with the Limited’s 18-inch wheels. Interior noise levels suffered a bit from wind noise around the windows. The kind that makes you keep checking to see if they’re all the way up.

Always wanting to prove their off-road merits, Jeep arranged for backwoods time in Northern California. We hit some real trails, not just specially created obstacles as many carmakers like to send you through. We’re not talkin’ hardcore stuff here, but this little Compass Trailhawk is clearly more capable than anything else in its class.

But, our advice is that unless you plan to do lots of off-roading, skip the Trailhawk and stick with still-capable lesser trims and save some money. Or, spend about the same and go for luxury with Limited trim. 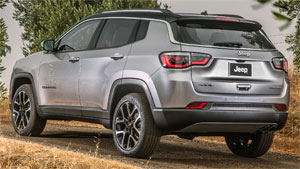 It will take adding a few option packages, but comprehensive safety systems are available; including Full-speed Collision Warning Plus with Advanced Brake Assist.

Regardless of drivetrain, Government Fuel Economy Ratings are all very close to the front-wheel-drive manual’s 23-City, 32-Highway, and 26-Combined. Our mileage loop was right on at 25.9 MPG.

The Energy Impact Score is 12.7-barrels of annual oil consumption with 5.6-tons of CO2 emitted.

Compass base pricing ranges from a Sport at $22,090 to Limited at $30,090. But be advised, there are some 2017 Compass carryovers from last generation on dealer’s lots. Trust us, the new one is the one you want.

With crossover and SUV sales showing no sign of slowing down, FCA’s Jeep brand could probably put just about anything out there and be successful with it. That’s not what they did with the genuinely all-new 2017 Jeep Compass. It’s miles better than its predecessor. And, with Jeep more and more a global brand, this small and capable family runabout is certain to have loads of appeal both home and abroad.