While the Kia brand has made major headways into just about every vehicle segment that they ventured into, the compact car segment, long the domain of the Honda Civic and Toyota Corolla has proved a tougher nut to crack. Now, that doesn’t mean they’re giving up. it just means Kia keep making this Forte ever better.

Admittedly, both the Civic and Corolla have been in the game for a lot longer than the Forte; but if we’ve learned anything over the last 20-years, it’s that Kia is both a quick study and never gives up. This new 2017 Forte S is proof of that.

Slotting in between LX and EX trim, the new middle-ground Forte S sedan features a host of upgrades to up the sport factor, both in looks and performance. 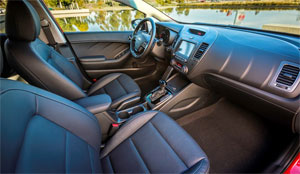 Starting inside; where a roomy, very attractive layout awaits.  You’ll find knobs where you expect them to be, as well as a good size touch-screen for infotainment.

This Forte S adds unique cloth seats with light-colored stitching; they are quite comfortable, but somewhat inexpensive looking, and a back to earth reminder of what price point you’re dealing with.

But, space in the long, wide trunk is quite cavernous at 14.9 cubic-ft, before you fold the split rear seats.

As for rear seat passengers, they find more legroom and all-around comfort than you’d expect in a typical compact sedan. And, that’s despite a sleek-looking sporty-coupe-like exterior profile; where a sizable lower body crease adds a distinctive flair.

Seeing a Forte coming at you, it looks very European; certainly more interesting than its chassis mate, Hyundai Elantra.

And there are even power-folding side mirrors as part of the Technology Package; very unique at this level.

The previous base 1.8-liter engine is no more; all Fortes are now powered by a 2.0-liter naturally-aspirated I4.  Ratings are 147–horsepower and 132 lb-ft. of torque.  It feels peppier than the numbers, and the standard 6-speed automatic transmission is on point.

Still, it’s not a hot rod, evidenced by our 8.3–second 0-60 time; but definitely very competent for a commuter car, with sharp throttle response and an eager launch off the line.  And that’s half a second quicker than we managed back in ’14 when this generation of Forte began.

The ¼-mile time was also half a second quicker; 16.3-seconds at 88 miles-per-hour, with confident shifts. 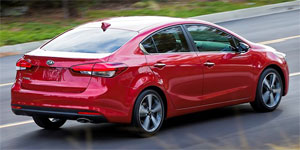 As for handling, like its exterior, there is a sporty edge that keeps things entertaining.  Even if it’s not a razor sharp one.

Still, with its unique tuning, the “S” is very tossable with nice grip and a fun feel throughout..

Our 119-foot average from 60-0 braking was respectable too; but a hard, short travel pedal and gradual fade made them feel less than reassuring.

Away from the track, that soft tuning delivered a comfortable ride, with interior noise levels comparable for its class.

There are Normal, Eco, and Sport drive modes to choose from; and steering feel really tightens up in Sport.

As for safety systems, only the basics are standard, but the Tech package adds a full array of advanced features including full autonomous emergency braking. We put it to the test and found good, consistent stops up to 15 miles-per-hour; but at speeds above that, full stops were not always achieved.

Government Fuel Economy Ratings are 29-City, 38-Highway, and 32-Combined.  So our 34.1 miles-per-gallon average on Regular was quite good.

We’ve said it before, but it does bear repeating.  Compact cars like this 2017 Kia Forte S, are part of the reason why midsize sedan sales are slumping.  It offers most of the utility of a midsize 4-door with the agile driving aspects of a compact. Throw in styling of a sport sedan, and lots of unexpected features, and you’ve got one solid little car that we think makes Kia more competitive than ever in the compact sedan segment.