Say hybrid, and the first name that comes to most minds is “Prius”. In truth, Toyota’s original 5-door Prius hatchback has not had a competitor, likewise built on a chassis built specifically to be a hybrid, until now. Enter, the Kia Niro. A small, dedicated hybrid that also plays to the current popularity of crossover utilities. So, let’s see if Niro hits the high notes on both.

This is the 2017 Kia Niro. And, According to Kia, it’s the first of its kind; an Urban Crossover Hybrid Vehicle.

They obviously hope that adding the word crossover will spur some additional sales. But to us, the Niro is more of a squarer rival to the Pruis hatchback, as well as the Prius V, while also being reminiscent of the short-lived Kia Rondo wagon. It had such “cabinosity”, and was quite possibly a vehicle ahead of its time.

Whatever you call it, the Niro is actually a great looking vehicle that has plenty of substance as well. An important note since many subcompact crossovers are more about show than practicality. 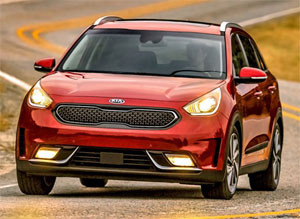 The hybrid powertrain is a 32kW electric motor sandwiched between a 1.6-liter I4 gasoline engine and a real 6-speed dual-clutch transmission. Energy is stored in a small 1.6kWh battery beneath the rear seat. Total output is 139-horsepower and 195 lb-ft. of torque.

A plug-in version should arrive this fall.

While a dedicated hybrid, the Niro does share its platform with the Hyundai Ioniq, and the fact that it is front-wheel-drive cast more doubt on the crossover title. But then, so does the very successful Kia Soul.

So hatchback, wagon or whatever, Niro delivers good pickup with no harsh regen braking feel. The DCT operates smoothly, but engine noise can be pronounced at times.

Powertrain transitions are also fairly smooth. The only fault we found was in highway driving with cruise control engaged. Here, the Niro seems to stumble a bit as it manages both power sources as well as selects proper gearing. So, the overall experience is not quite as refined as a Prius.

The interior however, looks fantastic. Not in a flashy way, but with an understated, almost classy quality. Materials look upscale, and feel good to the touch. The seats are also more comfortable than Prius. 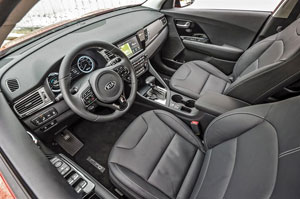 A power gauge replaces the tach, and our staff loved the clear TFT info display.

Outside, the Niro looks most like a cute yet sporty station wagon; with virtually no indications of it being a hybrid. Compared to the Soul, it is classier, and less aimed at the youngest buyers.

It also has more style than the Prius V and gets better Government Fuel Economy Ratings as well. Our Niro Touring rates 46-City, 40-Highway, and 43-Combined; we found those numbers a tad pessimistic as we averaged 47.2 miles-per-gallon of Regular without trying too hard. Kia also offers a stripped down Niro FE rated at 50-Combined, just shy of the least expensive Prius hatch.

Our Touring’s Energy Impact Score is a very good one, burning just 7.7-barrels of oil yearly with 3.4-tons of CO2 emissions.

We became very aware that fuel economy is the priority at our test track. It took us 10.1-seconds to lumber to 60, with plenty lag time before you feel any rush of power.

It was nice however, to experience real shifts, even if they were a tad slow; we much prefer that over constant CVT droning. We finished the ¼ mile in 17.7-seconds at 80 miles-per-hour.

Niro handled itself quite well through our cone course too. There was just the slightest bit of understeer when things got spirited; but for the most part, it goes where you aim it quickly.

Steering response is brisk, with a light but not over-boosted feel.

Braking from 60 averaged just 112-feet, which is quite good; as was overall stability while stopping. Pedal feel was a bit disconcerting though, as it goes right towards the floor with little resistance.

The 2017 Kia Niro is truly a product of its time. Part utility, part hatchback, part marketing strategy; all with a strong emphasis on high fuel economy. It’s another all-around excellent product from Kia, and if we were paying over $4.00 a gallon for gas like we were a few years ago, it would be an instant hit.  As it is now, it will probably still get there; it just might take a while longer.