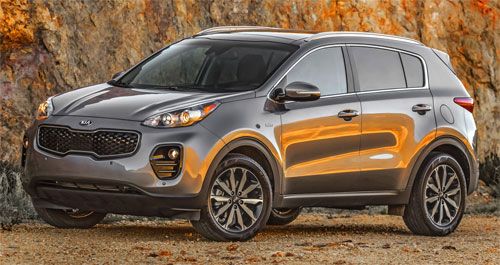 No vehicle tells the Kia story better than their compact Sportage utility. One of their first U.S. models, it started out as a cobbled together, rough-and-ready, rear and 4-wheel drive, mini ute. Now in its 4th generation, it has become a stylish, sophisticated, feature-packed crossover. But, with all that change, has practically taken a backseat in the Sportage?

Despite the impressive progress that the Kia brand has had in recent years, big success in the compact crossover ranks has alluded them to this point. It’s still largely the RAV4, CR-V, Rogue and Escape’s domain. But, Kia hopes to change that with this 2017 Kia Sportage.

We like the sophisticated new design, and at first we thought we were crazy for seeing a strong Porsche Macan influence. As it turns out, this Sportage was actually designed in Kia’s Frankfurt studio, so we’re not so crazy after all.

The front end, with its pinched grille and high-mounted slant-back headlights, seems to share more in common with the car side of Kia than big brother Sorento. Both those headlights, and the available LED fog lights below, are mega bright. 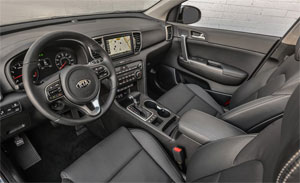 And we’ve certainly taken a shine to Kia’s latest handsome interior designs as well. This primo SX looks fabulous. But just keep in mind, lower trim levels, though still very nice, are not quite the eye candy that this one is.

There’s a myriad of controls, plus the available UVO 8-inch touchscreen; yet Kia continues to deliver all you need in a clean, flowing design; that’s also easy to identify and use.  And we like the fact that in upper trim levels, with the 4.2-inch TFT info center in the gauges, you get a confirmation message to just about every input you make.   Apple CarPlay and Android Auto are available on EX trim and above.

Yes, there are still some hard plastics around, but they are not touch points; and they seem to blend in well with the soft ones.

Steering wheel controls also rate very good, and the wheel itself has a beefy European look and feel to it.

There’s both good room and adequate seat comfort up front for adults, and an increase in size allows for additional space for the rear seat passengers too. 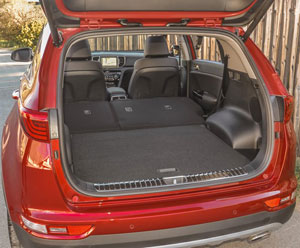 Though cargo space still comes up short compared to segment kings RAV4 and CR-V at 30.7 cubic-ft. with rear seat backs up; 60.1 with them folded.

This Sportage is based on a new chassis that is notably stiffer, so road feel is proportionally more solid; and easily more agile feeling than its main rivals. Is that the Macan’s influence again?

Naturally, we much prefer the turbo, as it has more than adequate power for moving the larger Sorrento, thus making this thing feel like a rocket; a really smooth one at that. Of course you do pay a penalty in fuel economy.

Government Fuel Economy Ratings for an all-wheel-drive turbo are 20-City, 23-Highway, and 21-Combined, which we matched perfectly with our mileage loop. So, there’s a good Energy Impact Score of 15.7-barrels of oil used and 7.0-tons of CO2 emitted yearly.

Both engines connect to a 6-speed automatic, in front or all-wheel drive. Kia’s Magna Dynamax AWD system places as much priority on improved handling as it does getting you through slick conditions.

And it clearly feels very nimble through the cones; steering is also more precise than last year, yet still numb. But even with the improved capabilities, background electronic nannies become foreground fun-stoppers all too soon. 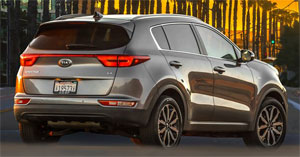 That all-wheel-drive system also provided great grip at launch, with zero wheel spin and only some minor turbo lag. We hit 60 in a nice 7.1-seconds. Shifts, however are sluggish; not too bad, but they hindered the true potential of this engine, taking us 15.4-seconds to complete the ¼-mile at 91 miles-per-hour.

On the other hand, a 110-foot average stopping distance from 60 is quite good.

Despite its continued refinement over the years, the fact that the Sportage has been unable to become a major player in the compact crossover segment is due more to the high volume of stiff competition than to any shortfalls. Regardless, there’s not much about the 2017 Kia Sportage that’s rough anymore; and it looks like the 4th time’s ready to be the charm!