While we’ve been spending a lot of time in Lamborghini Huracans lately, we all know it’s the Aventador and its V12 engine is much higher in the brand’s pecking order. Though that gap between the two is not quite as wide as Lamborghini would like it, thus a highly-revised Aventador comes our way…and with it a brand new 2017 Lamborghini Aventador S.

The Lamborghini Aventador has always been much more than just your standard rich guy garage trophy, with serious on-track credentials that most owners barely ever get more than a whiff of. Well, for those few who actually do seek to get the most out of their Aventadors, they’ll love the new 2017 Aventador S.

That affection starts with additional power for the naturally-aspirated 6.5-liter V12 engine. A boost of 40-horsepower puts it at 730, only 10 less than the still lighter Superveloce, with 509 lb-ft. of torque. Thanks to valve-timing and intake adjustments, it revs higher while also delivering peak torque sooner. No complaints about that! 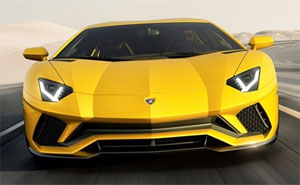 But, the big heart throb is new four-wheel-steering; which of course comes with an acronym, LRS for Lamborghini Rear-wheel Steer. Combined with the front steerers, and you have LDS, or Lamborghini Dynamic Steering.

You can feel it in action right away, as it has an almost unnatural feel at first; but once you learn to trust it and put it to good use, there’s no doubt it makes you faster on the track.

Laps around Spain’s Circuit Ricardo Tormo revealed that not all of the all-wheel-drive understeer has been eliminated, but you can feel bags and bags of torque going to the rears on corner exit, and plenty of grip to deal with it; aided by improved stability control.

Turning can still feel heavy and the overall experience remains intimidating, depending how much experience you have throwing half a million dollars around a corner.

We had a chance to drive the S back-to-back with the previous Aventador, and the S noticeably turns in a lot quicker.

We could also easily get a feel for the stiffened suspension, as the magnetic dampers have been recalibrated. All-wheel-drive software has also been altered, and the S adds a new driving mode, appropriately named “EGO”, which allows you to dial in your own custom setup. 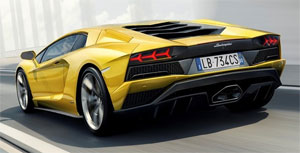 The Aventador S sticks with the Independent Shifting Rod transmission, which can feel downright brutal at times, hampering the daily driving experience, but apparently it has been smoothed somewhat. Engineers claim a true dual-clutch would add weight, and that buyers really like the classic race car feel of the current setup.

Lamborghini also claims to have taken some mass out of other parts of the car, so that even with four-wheel-steering bits, overall weight remains about the same.

And not to worry, it will still deliver you to 60 in under three seconds.

Obviously the four-wheel steering helps shorten the turning radius for parking or maneuvering around the pits.

But even with all of the updates and oodles of electronics controlling everything, this car still has a raw nature that gearheads will love…we sure do!

Visibility remains atrocious and the ride is stiff even in its softest suspension settings. If you want comfort or refinement, seek out a Huracan and save a few coins. 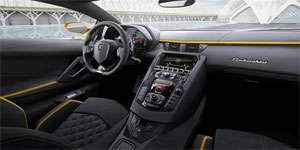 The Aventador S’s look is still mostly the same, but the bodywork does see a mid-cycle massaged.

There’s a new nose designed for increased airflow, and certainly looks more aggressive as well. Likewise, in back, the rear diffuser is redesigned; constructed of carbon fiber should you choose the upgrade.

Exhaust fumes spill out of three single outlets in a new triangle arrangement.

The active rear wing can deploy in a number of ways depending on speed and drive mode.

Altogether, downforce has been improved dramatically; without sacrificing any top speed.

Updates inside include a new configurable TFT digital gauge display, and Apple Car Play. Lambo could have gone a little farther here, but since most Aventador’s are highly customized, they’ll leave that up to you.

You’ll have to tap into a significant portion of your trust fund if you want to play with an Aventador S, as prices start at $424,845; just 20-grand more than a “base” Aventador, but still way less than a Superveloce.

The Lamborghini Aventador is unlike anything else on the road. Just about everyone knows what it is when they see one, and don’t easily forget about it when they do. And now with the S, Lambo has taught this old bull some new tricks, making their flagship supercar is more capable, and more captivating, than ever.