Hello and welcome to the start of the 37th season of MotorWeek. We’re glad to have you with us. Chances are you have never seen this car on any street, the Lamborghini Centenario. If you go to the Lamborghini website, you’ll find that the Centenario is part of their “one-off” line. Their most exclusive limited editions, built for… select clients. Now, we’re not “select” enough to actually make that list, but we’ve got an exclusive opportunity to drive this one; so off we go!

JOHN DAVIS: You may have gotten a clue from the name, but this 2017 Lamborghini Centenario was conceived to celebrate a 100-year anniversary. Not of Lamborghini the brand, but of founder Ferruccio Lamborghini’s birth.

Loosely based on the Aventador Superveloce, the Centenario has a unique carbon-fiber body draped over its carbon-fiber monocoque chassis. Yes, that does make for carbon-fiber overload, so hopefully you’re a fan of the miracle material. Claimed dry weight is under 3,500-lbs.

Even the wheels are trimmed in it, with blades that supposedly aid in brake cooling. Tires…20s in the front, 21s in the rear. 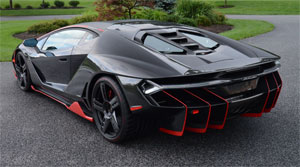 A host of colors are available, but we like the exposed carbon-fiber look just fine.

The rear wing has been extended to provide additional downforce when approaching this car’s 217 miles-per-hour top speed.

No rear bumper, just loads of aero blades making up a ginormous rear diffuser. Reminds you of a Batmobile doesn’t it?

Yet, through it all, it still retains that classic Lamborghini shape that every car crazy kid loves.

Even though some of our staff found the bodywork a bit more video gamish than menacing; there’s no denying the brightly-trimmed darkness has some serious presence. And proof of what can happen when designers are allowed full freedom to create without being restrained to mass production.

Aventador bones also means there’s a screaming naturally-aspirated 6.5-liter V12 engine located in the back, producing 759-horsepower; thanks to Lambo boosting max revs a bit to 8,600. 0-60 is 2.8-seconds and less. A trio of exhaust tips mounted dead center in the rear, trumpet exhaust notes that are truly magical.

BRIAN ROBERTS: “Now if this car doesn’t get your heart pounding instantly, I don’t know what would. I’ve been driving it maybe 30-miles so far this morning and the one thing that I really notice is, when you mash on the throttle, the power is instant, it feels like you’re going 200 miles-an-hour. It is insane.”

JOHN DAVIS: Behind the wheel, you’ll be taking in all of that insanity in a truly special environment. Again, there are hints of its Aventador beginnings; but each interior is mostly built to order, with virtually anything possible.

Seats are thinly-covered race buckets; they’re not too overly bolstered, but they certainly lock you into place in this surprisingly roomy cabin.

Our tester featured a black and red theme that perfectly matched the exterior. Plenty of carbon-fiber here as well, along with a digital dash, and fully inclusive touch screen for controlling just about every aspect of the car.

Included on the tablet are full telemetry with performance data recorder, and even Apple CarPlay. 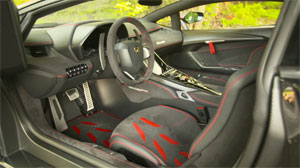 DAVE SCRIVENER: “The Lamborghini Centenario is not so much a car you drive, as one you experience. Of the thousands of cars, I’ve driven in my career, this one is probably the most outrageous.”

JOHN DAVIS: MotorWeek had a rare opportunity to experience the heck out of this one; and it was extraordinarily magical. Lamborghini’s new rear-wheel steer system is included as well as all the basics of the Aventador, including the Independent Shifting Rods transmission and magnetic shocks.

Our limited adventure time behind the wheel didn’t include any track time, so we didn’t get a chance to experience any of the additional downforce provided by the new bodywork. So we can only imagine what an awesome experience it would be.

To say it’s a great daily driver would be a lie. But, it feels super nimble, gives great feedback, and makes you almost feel comfortable pushing it. 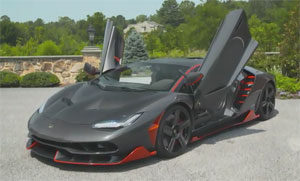 A serious lack of sound deadening material in a cabin full of hard surfaces can either be a detriment, or quite possibly the greatest thing your gearhead mind could conjure up. As the aria of power surging from the V12, echoes throughout the space like an Italian concert hall from hell. Only one guess on which side of that spectrum we fall.

It’s hard to make an argument any car is worth that much money. But apparently, at least 40 people think they are, as all 20 Coupes and 20 Roadsters that will be built have already been snatched up. No wonder! This 2017 Lamborghini Centenario is a truly unique piece of automotive art that will be talked about for years to come, and a fitting tribute to Lamborghini the man; who believed nothing was impossible.