There are likely a few Land Rover LR4 fans out there that will be sad that the naming series has been retired. So, there will be no LR5. But, take heart, as the moniker LR4, and for that matter the LR3 before it, were used here on what most of the rest of the planet knew as the discovery. Well, times change, and an all-new, redefined Discovery has just arrived, ready to rediscover America!

From 1994 to 2004 the first two gens of the boxy, mostly no-nonsense Land Rover Discovery made a lot of impressions state side. But, due to quality issues, many of them were bad ones. Hence the name change to LR3 and LR4.

But, with those black marks ancient history, and SUVs increasingly taking the place of comfy family cars, it seemed a good time to introduce the 5th generation Discovery to Americans by its proper name.

And, what we Yanks will discover is one very attractive and friendly SUV. There are of course still some traditional elements, such as the clamshell hood, and a hint of past Discovery’s stepped roofline. But overall the look is clearly softer, more modern, appearing not too dissimilar from the big buck Range Rover. 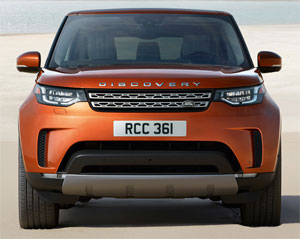 And just to muddy the waters further, the middle-weight Discovery shares virtually nothing with the smaller Discovery Sport; rather, it’s built around the same aluminum structure of the aforementioned Range Rover.

The familiar ZF 8-speeed automatic comes with either engine. We spent plenty of time with both gas and diesel Discovery’s, and there’s no real wrong choice here; it just comes down to whether you prefer diesel torque and range, or supercharged smoothness and simplicity.

Sharing that Range Rover’s mostly aluminum uni-body design, means a drop in weight of almost a thousand pounds from the full-framed LR4.

But don’t worry, according to Land Rover, that enabled them to actually improve its off road ability; even claiming it’s the most capable Land Rover yet built. 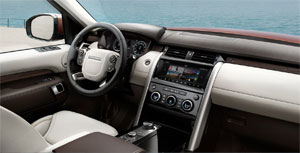 Land Rover also says Discovery was designed for the modern family from the inside out, with loads of extra storage space, up to 9 USB ports, and InControl WiFi.

2nd row seating is still a little more cramped than some rival crossovers, but our tester had optional headrest monitors in place to distract from the awkward seating position.

7-passenger seating is optional, and the 3rd row is actually usable. Seats are power folding, and you can even do it from your smart phone.

At first glance, it looks like the traditional split tailgate has been replaced by a huge hatch. But, Land Rover understands. So an inner tailgate automatically deploys when the lift gate opens.

It was the diesel-powered Disco that we took to our test track. There was good power off the line; maybe not the whoosh of brute force we were expecting, but perhaps that’s to keep the well-healed Rover customer from spilling their $9 brew every time the light turns green. 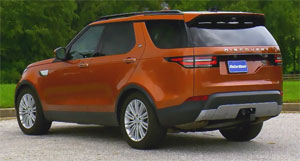 Despite big jumps in suspension technologies, the handling course is still not a place that any Land Rover feels the most comfortable. Even with the optional air suspension, there is plenty of soft, slow roll; accompanied by very quick steering that keeps you on your toes. Still its miles better than its predecessor.

Government Fuel Economy Ratings for the petrol-powered Discovery are 16-City, 21-Highway, and 18-Combined. The Diesel rates 21-City, 26-Highway, and 23-Combined; we averaged 25.8 miles-per-gallon.

The Diesel also has the better Energy Impact Score, at 16.6-barrels of annual oil consumptions with CO2 emissions of 7.4-tons.

Base pricing of $50,985 is very competitive with other European offerings, especially since here four-wheel drive is standard. The diesel engine tacks on $2,000 more.

The 2017 Land Rover Discovery is a highly capable SUV, perfect for tackling town and country with equal finesse. It may be built in the U.K., but it certainly seems like it was made just for us here in the colonies; sort of embodying what the Jeep Grand Cherokee tries to be, a proficiently rugged, yet luxurious all-road driving experience.