Every once in a great while something different comes along; something totally unexpected. That was the case when Land Rover unveiled a convertible version of their compact Range Rover Evoque crossover. Now, much like us, you may be asking yourself why an Evoque drop top? Well, that’s what we’re here to find out.

The 2017 Land Rover Range Rover Evoque Convertible is certainly a rare animal, a drop-top crossover utility. And, it is also the first convertible to ever wear a Range Rover badge.

Yes, we do remember the Nissan Murano CrossCabriolet. And, it may be a coincidence that an Evoque Convertible concept showed up at Geneva not long after the CrossCabriolet went on sale. Though Nissan’s effort only lasted 4-years before they pulled the plug. Something tells us Range Rover is in it for the longer haul on this Evoque.

It’s clear Range Rover wanted to keep the Evoque’s lines intact as much as possible with the top up. The Z-fold design of the fabric roof does just that, while also allowing it to fold directly behind the rear seats quickly and compactly. 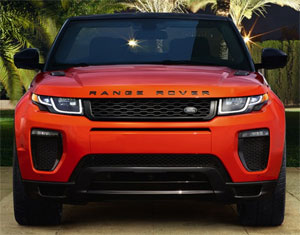 It looks completely different with the top down of course, still very stylish and less bulbous than the CrossCabriolet; appearing more like a jacked-up luxury roadster.

There’s not much “stretching out” space inside, but it is adequate. Front seats are very comfortable and quite posh; and the seating position is very high.

The two rear seats are equally plush and there’s a decent amount of headroom with the top up; but adult-size leg room is hard to come by.

Making room for the folding top obviously eats into practical cargo space, but at 8.9 cu-ft. it’s actually not too bad for a small convertible. The space is the same whether the top is up or down, though the opening to access it is rather small.

Under the hood is the same 240-horsepower 2.0-liter turbo I4 that’s found in the Coupe and 4-door Evoques; putting out 251 lb-ft. of torque.

Transmission is a 9-speed automatic; all-wheel drive is standard. The front-wheel-drive based system sends power to the rear wheels only when needed. Terrain Response and All Terrain Progress Control are also included. 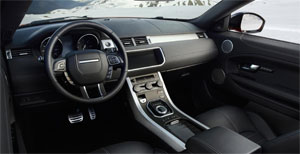 Whether it’s over 600 pounds of additional weight, or aerodynamic differences; or both, at our test track the Evoque Convertible timed a fair bit slower than its hardtop counterparts. 7.5-seconds to 60, almost a full second slower than the last Evoque we tested, though it still did well for a small ute.

Clock aside, it actually seemed plenty powerful after a brief hesitation at launch; and throughout the ¼-mile, shifts were quick and strong. There was also a nice engine growl coming out the exhaust as we tripped the lights at 15.9-seconds at 87 miles-per-hour.

It was good fun through the cones too. Lots of grip, light and fast steering, good feedback, and no noticeable flexing compared to other Evoques. Sharp throttle response even let us squeeze out some easily controlled oversteer.

Minimal fade and 60-0 braking average of just 115-feet, adds to the sporty, solid feel of this drop top utility.

So, the whole experience, vastly better than the flexible flier Murano CrossCabriolet. 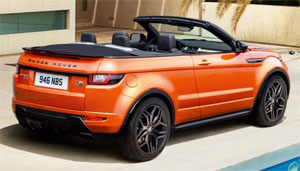 Government Fuel Economy Ratings are 20-City, 28-Highway, and 23–Combined.  Which we matched with an average of 23.5 miles-per-gallon of Premium. The Energy Impact Score comes in average with use of 14.3-barrels of oil yearly, while emitting 6.5-tons of CO2.

Available in only SE Dynamic and HSE Dynamic trims, Evoque convertible pricing starts at $52,995. That means going topless is less than a $1,000 premium.

The 2017 Land Rover Range Rover Evoque Convertible is certainly not everyone’s cup of tea, and there very well may be a good reason that no one else currently makes a convertible utility.

But as they say; nothing ventured, nothing gained. And for about the same price as adding seat heaters, you can get a truly unique Evoque.

So, forget about the fact that it’s just a roofless version of a utility vehicle; just look at it as a small, 4-seat go anywhere, fun-in-the-sun machine with solid handling and braking that doesn’t seem to render itself immediately to Florida rental car fleets. Then, this Evoque makes a whole lot more sense.