Maserati has made some amazing cars through the years. But over the last decade or so, has been in a bit of an identity crisis, trying to figure out where exactly they fit in this century’s automotive landsacpe. Well, it looks like they finally have a plan, and the first step is growing the brand by shrinking the product, with a mid-size sedan aimed squarely at the likes of BMW 5-series. So let’s see if the Ghibli hits the mark.

The 2014 Maserati Ghibli was the first step on the road to expanding the Maserati brand. The second step is the recently launched Levante SUV. And while that 5-door utility may ultimately prove to be the most important step, it wouldn’t have happened without this 4-door Ghibli sedan, which itself gets refreshed for 2017.

Based on the larger Quattroporte sedan, it’s about 7-inches shorter in the wheelbase, and less than a foot shorter overall.

The Ghibli is stunning to see, though not necessarily beautiful, but you sure know it’s something special when you see it coming down the road.

Under the hood in this S Q4 is a twin-turbo 3.0-liter V6. While designed by Maserati, it’s assembled by partner Ferrari. There’s a lovely growl on the startup, quickly settling into a gentle purr at idle. This sweet sledgehammer from heaven delivers 405-horsepower and 406 lb-ft. of torque. Base Ghiblis sport a detuned version that gets a boost in horsepower for ’17 to 345. 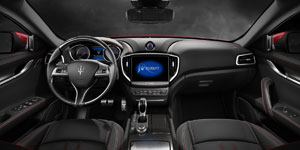 Transmissions? An automatic with 8-gears, and the Ghibli comes in rear-wheel-drive, with all-wheel-drive optional.

There’s a definite Italian flair to the interior, though less exotic and more mainstream than what you’d see in say… a Ferrari.

Craftsmanship is very respectable; things are very well put together; and without any rough edges. Not something we can usually say about Italian cars.

But there are a few “built to a price” reminders like Fiat-Chrysler switchgear including a version of UConnect infotainment; which we’re actually okay with since it works so well. For ’17, they’ve added a new rotary central controller in order to be more consistent with European rivals.

Front seats are very comfortable, with just a bit of a sporty feel. Rear seats are a little hard to fold yourself into; but once you’re settled, they’re actually quite comfortable.

On the street, the Ghibli feels quite sporty and, despite a curb weight of over two-tons, is impressively agile.

Ride is mostly compliant, with a firmness that puts it right there with other Euro sport sedans. But we did get a few surprisingly harsh jolts over larger bumps.

The handling benefits of the all-wheel-drive setup weren’t readily obvious to us at the test track, where we felt the Ghibli’s size and weight the most. There is some expected front push; but also a crabbing feeling as the rear tries to catch up. Steering effort is light at lower speeds, and gets very heavy as the pace quickens; with good feel.

The AWD system is clearly tuned more for all-weather traction than adding high performance, like Audi’s quattro setup. The result is a very confidence-inspiring feel, that might even make the driver seek out bad weather instead of avoiding it. Certainly not what you’d want to do in most luxury cars.

The S Q4 hops off the line with urgency, only to hesitate briefly as the turbos spool up full; at which time they unleash a flurry of power, propelling you to 60 in just 4.7-seconds.

From there, there’s all kinds of bark and plenty of bite as the trans rips through the gears quickly and smoothly; until the ¼-mile ends in 13.2-seconds at 105 miles-per-hour.

Ghibli pricing starts at $72,850, and you’ll pay just 8-grand more for top level S Q4; though you can approach 6-figures with options.

It says a lot about a brand when they introduce a new 4-door and instantly double their sedan profile. The 2017 Maserati Ghibli is not for everyone, rather primarily for those that desire an Italian flair in their luxury-performance sedan. Indeed, we were favorably impressed with it, and think it proves that Maserati has a clear view of its own road ahead.