There’s a new Mazda Miata in town, and it’s more than just a hardtop, it’s something entirely different. It’s the MX-5 RF, for retractable fastback. Now is it just a Miata that’s better in bad weather, or is it a better Miata period? Well, we feel it’s our duty to get to the top of it!

Sports cars have been in a bit of a slump lately, though the Mazda MX-5 Miata has mostly been immune. But just to ensure the excitement meter stays pegged; for 2017, Mazda has something special for all of us, this Miata RF.

Much different than the previous gen’s Power Retractable Hard Top, this Retractable Fastback features a somewhat complicated design that somehow works very smoothly, and stores the center section of the roof only, in the same amount of space as the soft top, leaving trunk capacity exactly the same. You could call it a Targa, but Mazda chose not to. 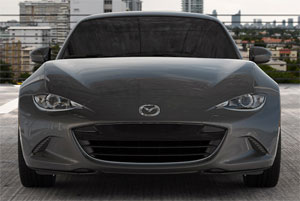 It’s much better in every way than the previous hard top. And as sharp as it looks with it up, we can see a lot of style-conscious fans buying it for that reason alone.

The RF also includes some additional sound-deadening material, so engine and tire noise are more tempered, a plus if you’re planning longer trips.

The RF looks much different in profile of course, unique enough that it wasn’t instantly recognizable as a Miata to many we encountered.

The RF weighs about 110-lbs more than the roadster, but you won’t notice it in around town driving.

And we love that everything remains super simple inside. All is right where you expect it to be, including the shifter for the standard 6-speed manual. 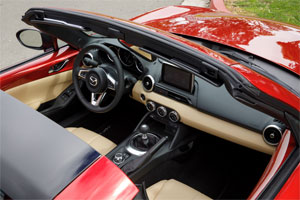 No other changes inside, save for the button to set the top in motion and a new TFT screen in the gauges that will make its way into other Miatas soon.

Plenty of headroom remains, but if our RF had any downside, it was wind noise. Too much of it made it inside, seemingly right by our ears.

Nothing deviates from the norm in the powertrain department. Under-hood lies a SKACTIV-G 2.0-liter I4 with 155-horsepower and 148 lb-ft. of torque.

Maybe it was the top’s added weight, or test day’s hot temps, but our RF manual was a few tenths slower to 60 than the last cloth top we tested, at 6.3-seconds.

Only moderate throttle modulation is necessary at launch, as there’s not enough torque to really cause problems. Both clutch and shifter work as precisely as always, allowing you to move quickly through the gears. We finished the ¼-mile in 15.0-seconds flat at 92 miles-per-hour. 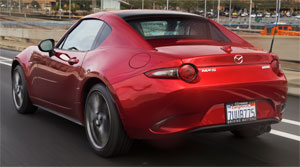 And without a doubt, no matter what is or isn’t over your head, the MX-5 remains a great place to take in the blurry sights surrounding your favorite back road. Or our choice, the curves of Northern Virginia’s Dominion Raceway.

We know that a hardtop can add some rigidity to a car’s chassis, but to be honest we didn’t sense that either, as the basic car is now so solid.

Both the suspension and electric power steering have been recalibrated, and if anything, we noticed a little less feel through the wheel than before, though reaction is still very quick. Throttle response also felt a little deadened.

The RF is only available in Club and Grand Touring trim, with base pricing that works out to be around 3-grand extra. So, its $32,430 for the Club RF, and $33,495 for the Grand Touring.

So, you have to really love the new look. Now, we view the MX-5 as the best bargain among sports cars, so we’d probably stick with the original and spend the money we saved on performance upgrades.

Still, one thing is clear. Mazda took great strides to give buyers not just a hard top version of our beloved Miata, but something that is truly different. The 2017 MX-5 Miata RF is a uniquely charming take on the minimalist roadster theme; and a beauty not just for our eyes, but for all of our senses.