Despite producing a slew of cars that are both more attainable and more livable than ever, like the “sports” series 570s we track tested last spring, McLaren obviously still feels they have more work to do. Thus this 570GT has arrived. Now it’s the closest they’ve come yet to building a true “grand touring” machine. But in doing so, have they made it less of a McLaren? Well let’s “tour” together and find out.

McLaren, the British specialty purveyor of ultra-high performance cars, is once again expanding their lineup with a new Sports Series model, this 2017 570GT. And what appears at first glance to be the same, is actually quite different.

It does indeed share most of the 570S’ body panels, but many have been tweaked slightly, and even the side sills have been cut down a little to make getting in and out easier.

More noticeable is the new glass rear hatch, opening to the side to reveal 7.8 cubic-ft. of leather-clad luggage space; a front trunk still remains as well. There are plenty of tie downs for keeping your goods secure; and customized luggage that makes best use of the odd shaped area. 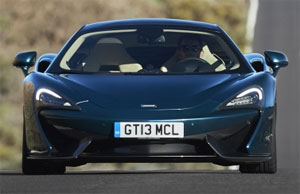 It looks as radical as ever, with air intakes and down force inducing elements a big part of the design. As are minimal LED lights. There’s plenty of supercar spec. exposed carbon fiber and of course McLaren’s signature dihedral doors.

Attempting to fully earn the GT moniker means some noise cancelling materials have been added, the suspension has been softened, and the steering has a less hyperactive nature.

And while this McLaren remains a true driver’s car in every sense, giving you tremendous feel; that feel is vastly different than in the 570S. And at the risk of coming across as softies, we actually like the GT better than the S.

Everything from road feel to power delivery is less severe, even when in track mode. Building cars with this much performance is truly impressive, but making that power attainable and this easy to live with, is perhaps even more remarkable. 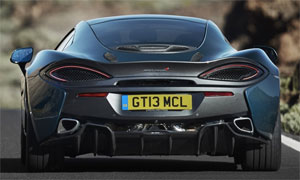 Still, the 570GT is more of a car you’d take to a summer home, or on a coastal tour of some wineries; rather than all-out track days.

It’s not all sunshine and roses, however. There is some noticeable turbo lag in normal driving situations; and the transmission is not fully on board with the new mission, as it still likes to hold onto gears like it’s on a track rather than exhibiting the typical quick up shift feel you might be looking for at this relaxed pace.

The glass roof and accompanying structural changes have tacked on about 120-lbs of additional weight, so it won’t quite match the 570S’ 3.1-second 0-60 time. But trust us, you’ll be fully enjoying your time inside this car, and in no particular hurry to get to where you’re going, or to get out of the car once you get there.

That’s because the atmosphere inside is loads more inviting. There’s a lot less exposed carbon fiber, now covered with more carpeting and soft touch materials, as well as just an overall feel of being a real car and not a street version of a race car.

Seats, though still firm; are much more comfortable, covered in more luxurious leather, and have far less aggressive bolstering.

The glass roof is higher than the 570S’s so there’s more headroom; and it allows a lot of light in, making it feel roomier still. But that light can be too much at times as there’s no shade for covering it.

The central control area, with minimal switches and a mostly touchscreen interface, carries over directly from the 570S. Likewise, the highly configurable gauge panel carries straight over; nestled behind this gloriously control-free steering wheel.

As for more mundane matters like petrol consumption? Government Fuel Economy Ratings are 16-City, 23-Highway, and 19-Combined. With an Energy Impact Score of 17.3-barrels of oil consumed and 8.0-tons of CO2 emitted yearly.

With the 2017 570GT, McLaren continues to grow their lineup, now attractive to luxury-oriented high rollers as well as the track-day faithful. And, they continue to do it with cars more unique than comparable Ferraris or Lamborghinis. We understand if one might have a hard time deciding between the 570S and the new 570GT. But, trust us, driving it makes that decision easy.