The Germans are here to take your driving away! Now I know that sounds a bit alarmist. But it seems like these days, all anybody wants to talk about is “self-driving” car technology. Now I’m driving an all-new 2017 Mercedes-Benz E class equipped with Drive Pilot, arguably the most advanced autonomous driving system you can buy today. Yet, even Mercedes describes Drive Pilot as more of a driving assistant than a true co-pilot. So, let’s drive on and see how it works, and if it makes the E300 more than just another midsize luxury car.

Whether an E-class by name or not, there’s been a midsize sedan in the Mercedes-Benz lineup since 1953. So they consider this 2017 Mercedes-Benz E300 the start of a 10th-generation. Ergo, it’s a critically important car for the brand.

While the S-class acts as the showcase for what the brand is capable of, it is in the E-Class where aspirations come down to reality and a large, diverse owner group that must be kept satisfied.

Physically larger as you would expect, wheelbase is up over 2-inches, with overall length up just shy of 2; yet it really doesn’t look bigger.

Power comes up from the C-class, the now ubiquitous 2-0-liter I4 turbo. Complain if you will, but most buyers will likely be more than satisfied with its 241-horsepower and 273 lb-ft. of torque. We were. 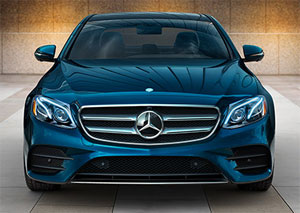 Helping it along, is an eco-minded 9-speed automatic; and in our tester’s case, optional 4MATIC all-wheel-drive.

Now, on to the Mercedes-Benz Drive Pilot system, which gets you as close as you can legally get to autonomous driving. Making it happen are a plethora of cameras and radar sensors, and some hefty computing power.

But, just how close is this technology to mass market prime time?

JOHN DAVIS: “As one colleague put it, Drive Pilot is for when you have to drive but you don’t want to. Like long stretches of boring interstate or stop-and-go traffic. In those situations, it works pretty well. It even uses the familiar cruise control stalk to activate it. Drive Pilot tries to keep you in the center of the lane, although we have noticed a little ping-ponging effect at times. And, you can take your hands off the wheel, although after about 30 seconds or so you’ll get first a visual warning and then a visual and audible warning. And, if you don’t mind it, it will bring you to a stop. Drive Pilot navigates gentle curves pretty well and if you want to change lanes you put on the turn signal for a couple of seconds and if it is clear the car will move over to the lane next to you. But, this is not a set it and forget it system."

JOHN DAVIS: And when absolutely necessary, Active Brake Assist will bring the vehicle to a full stop to avoid a collision.

But lest you worry, this E-Class is still a car that you’ll want to drive yourself!

Through the cones, the E300 boasts excellent agility, but also a very hefty feel. Steering was a tad light, yet it was still very precise.

The 9-speed auto does a good job of keeping the boosted 4-banger in its sweet spot; shifts were firm, but not especially fast. With an average stopping distance of 109–feet from 60 miles-per-hour, braking performance was great; with a firm, solid pedal.

On real roads, there’s a peaceful highway nature that’s to be expected; and when driven at a relaxed pace, the powertrain is inoffensive in every possible way.

The interior is clean, materials exquisite, and upgrades include a wide fully integrated dash with near-panoramic gauge and control screens that look as attractive as they are functional.

With many of those functions the duty of the Command console controller and its redundant finger-tip controls. And, we’ll praise the two exquisitely neat rows of audio and climate switchgear that we tended to use most often.

Seat comfort is among the best we’ve ever tried, with plenty of leg and headroom in front…and in back…where the seatbacks fold for near SUV like versatility.

The spacious trunk is more than ample by itself measuring 13.1 neatly lined cubic feet.

Base pricing is simple, starting at $53,075, just choose Luxury or Sport trim, and if you want all-wheel-dive. Advanced safety and self-driving systems add another 10-grand.

While most people nowadays would rather throw their luxury money down on an SUV, Mercedes-Benz thinks the 2017 E300 is worthy of such lavish loot; as they claim it’s not only one of the greatest cars ever, but “one of the most intelligent machines ever made”. That’s especially true if you opt for Drive Pilot, but use it more as safety net that surrogate.

But, we’ll just call it one of the finest luxury sedans money can buy, and one you will still love to drive yourself.