The original Jeep was the first military vehicle that found widespread popularity in civilian dress. Then came the Hum-Vee, which also spawned GM’s hummer brand of over-the-top 4x4s. Still, the Mercedes-Benz G-Class, or G-Wagen, stands apart. Now in production for almost 40-years, the “Gelandewagon” has long since left its military side behind, and become the pinnacle of Mercedes exclusivity.

Whether it’s our own Jeep and Hummer, Japan’s Land Cruiser, or Britain’s Land Rover, every developed country seems to have a battle-ready vehicle built to conquer both enemy territory as well as suburbia. For almost 40 years in Germany that role has been played by the Mercedes-Benz G-wagen, or as it’s now known, the G-Class.

As has always been the case with all of these military-inspired utes, the G-Class has become more-and-more popular, continuing to grow more user-friendly, with ever increasing levels of comfort and luxury. 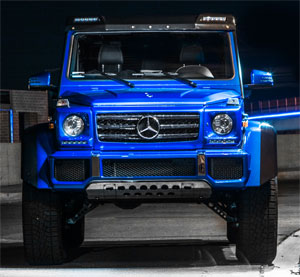 But then every once in a while, engineers seem intent on proving that these leather-lined rigs are built for a lot more than just trolling country clubs or making a statement in the carpool lane. Thus, we get special versions like this 2017 Mercedes-Benz G550 4X4 squared.

It’s large, in charge, and towers over just about everything on the road. Yet despite the massive rolling stock, jacked-up suspension, and high center of gravity; steering remains responsive, and there’s very minimal wandering, even at highway speeds. Of course there’s not much sidewall flexing with these 22-inch wheels wearing 325/55 Pirelli Scorpion A/Ts either. Overall, it feels more tame and confident, than macho or overbearing.

Moving this behemoth around is a 4.0-liter twin-turbo V8 that delivers 416–horsepower and 450 lb-ft. of torque. It feels fantastically powerful, just adding to the assertive nature that this truck gives you.

We let it loose at our test track and hit 60 in just 6.5-seconds. For reference that’s over 3 seconds faster than the last Hummer H2 we tested. There’s enough low end grunt at launch to spin these 22s up a bit, but not enough to make it too difficult to get away cleanly.

Plenty of mid-range beef keeps it moving, while the 7G-Tronic automatic clicks through gears quickly and firmly. It’s easy to forget you’re riding so high off the ground, as the ¼-mile flies by in 15.1-seconds and 91 miles-per-hour.

Perhaps more impressively, the 4X4 squared will stop from 60 in just 112-feet. Pretty amazing considering it weighs an astounding 6,700-lbs. 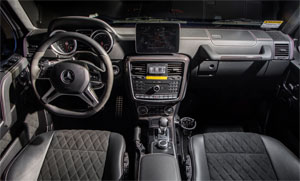 But, on to what this thing is really all about, off road supremacy.  Mercedes has taken the already capable G-wagen to the ultimate extreme, and it all starts with new portal axles.

The quick and dirty way of explaining what they are, for those of you who don’t read Crazy Offroad Vehicle Weekly; is the rear differential and axles, instead of being directly inboard of the wheels, are mounted much higher, up in the frame. And power gets down to the wheels through a set of gears.  It allows for a whopping 17-inches of ground clearance; that’s about 10-inches over a stock G-class.

All three differentials can be locked, and while there is some electrical assistance, it’s nothing like a nearly automated Land Rover. Here, you pretty much take control of everything.

After two weeks of blasting around hill and dale in this beast, we found it hard not to be nervous about tearing up the terrain in this thing. But, it seemed to laugh off the worst we could muster around here. Our biggest test complaints come down to defaulting to eco power and comfort suspension every time you power it up, and the awkwardly low hanging rear bumper obviously done for compliance sake.

Once you manage the extremely high up entry, you’ll find nothing lacking in creature comforts. This brute is every bit a Mercedes-Benz; whether you’re talking about the quilted leather upholstery, climate-controlled seats, or features like navigation and onboard WiFi. 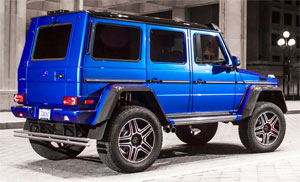 The boxy Bronco-ish body gets a lift of its own; while fender flares get serious extensions to cover all of that rubber.

And yes, Government Fuel Economy Ratings are as abysmal as you expect, 11-City, 11-Highway, and 11-Combined. Hey, at least they’re consistent. Somehow, we managed to eke out 13.3 miles-per-gallon on Premium.

The Energy Impact Score is about as bad as it gets too, burning through 30.0-barrels of oil every year, and emitting 13.7-tons of CO2.

By far, the worse numbers are the OMG prices. While you can get into a base G550 for $123,325, you’ll have to pony up at least $225,925 to get squared. Of course, you could build an equally capable Wrangler for half of that, but that’s not exactly the point of this rig now is it?

So, what is the point of the 2017 Mercedes-Benz G550 4X4 squared?  Well, it’s a way for Mercedes-Benz engineers to showcase what the brand is capable of.  And at the same time, if you can afford it, you get to enjoy their labor of love, on or off road, in one of the most insane vehicles we’ve ever driven.