We look forward to the day when we’ll no longer be scratching our heads, guessing which new Mercedes-Benz SUV is what. By then we’ll hopefully have the full GL lineup down pat. But, right now, it’s time to figure out what niche the GLS fits among Mercedes’ ever expanding SUV portfolio. Here’s a hint, it’s a big one.

What was the GL, is now the 2017 Mercedes-Benz GLS, the largest crossover in their lineup. And it gets a mid-cycle makeover to go along with the new name.

The structure is of course largely the same, but all body panels and plastics in front of the A-pillars are new. It still looks big and boxy, not as modern as some other luxury crossover offerings; but clearly upscale with its nostalgic, tall wagon shape.

Autonomous braking is standard, and works in a very civilized manner. But you can add a host of other safety and driving aids, and to be honest they reach a new level of intrusiveness. We appreciate the help, but most of the lane keep guidance and collision warnings are so annoying, we ended up turning them off.

Despite over 5,000-lbs of bulk, the GLS feels almost nimble; more mid-size sedan than behemoth. Though it is a perfect example of better living through technology, as it’s all just an illusion aided by a revised AIRMATIC air suspension with a host of 1s-and-0s constantly traversing all corners. 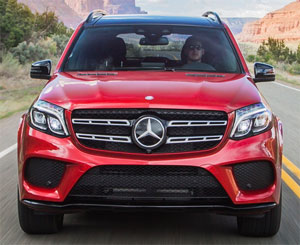 A multitude of driving modes are available, including Off-Road+, if you add the Off-Road Engineering package. And of course, traction control is always ready to intervene when you need it.

A 362-horsepower turbo-V6 is more than capable, but this V8-powered 550 ups power to overkill levels in an absolutely terrific way. The 4.7-liter twin-turbo outputs 449-horsepower and 516 lb-ft. of torque.

A diesel is also offered for the frugal-minded, and of course AMG makes an obscene 577-horsepower version for the few.

A 9-speed automatic transmission is new for ’17; while 4MATIC all-wheel-drive remains standard. And all GLS models are now rated to tow 7,500-lbs.

Government Fuel Economy Ratings for the GLS550 are 14-City, 18-Highway, and 16-Combined; with our average certainly not stellar at 17.3 miles-per-gallon on Premium.

But you’ll forget all about that when you mash the gas and leave the commoners behind on your way to 60 in 5.7-seconds.

Shifts are fast and smooth, and didn’t seem to slow things down at all; on our way to a 14.2-second ¼-mile at 98 miles-per-hour. 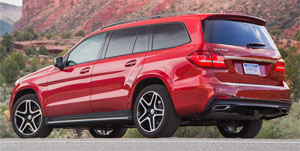 When it comes to track handling, the GLS felt about as slow and heavy as we expected; with lots of electronic intervention. Putting AIRMATIC suspension in its firmest setting keeps roll from feeling excessive; but you also feel very disconnected.

Surprisingly, there is some of the best steering feel you’ll find in a big ute; but overall the GLS is nowhere nearly as sporty-minded as Audi’s Q7.

Now as for comfort on the way to-and-from the track, the GLS had us gliding down the highway effortlessly. It did feel a little floatier than expected at posted speeds; but leaving it in Sport mode helps, as that feels to us where normal should be. Regardless of mode, things are extremely quiet inside, giving you and your passengers the royal treatment.

Which of course is what Mercedes-Benz’s, especially the pricier ones, are all about. The GLS interior is luxurious to the hilt, with materials that are incredible; all-in-all opulent, though not perfect, as fit-and-finish didn’t quite seem on par with their best sedans.

A large panorama sunroof is optional, but even with the translucent cover in place, it seemed to let in a lot of heat on sunny days. 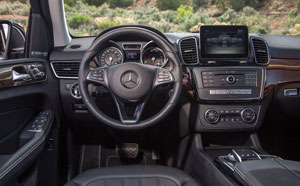 There are some modest interior upgrades for ’17; the radio and infotainment interfaces are improved; and we like to see plenty of nice, big buttons; so you’re not forced to use the COMAND controller for all functions. Though that COMAND controller adds new touch and swipe functionality as well.

The 2nd row is not as roomy feeling as full-size American utes, but access to the 3rd row is quite easy.

While most big luxo-utes are largely the same these days, the 2017 Mercedes-Benz GLS550 easily rises above even its rarified niche. It has copious capabilities and truly spectacular ride quality. All that you might expect. But now, with that added S, the GLS is more “special” than ever.