We’re seeing more and more European brands turning their attention away from their long time affection for diesels, and beginning to embrace electrified plug-ins for their future powertrain needs. That includes Mercedes-Benz with both PHEV versions of the C-class and S-class sedans. So let’s take a closer look at this trend, and see what more and more luxury buyers will be plugging into.

Mercedes-Benz, always looking to go the extra mile, now has a pair of luxurious four-doors in the plug-in hybrid parade that can do those extra miles purely on electric power. The updated 2017 S550e for the flagship faithful, and the 2017 C350e for those closer to the mainstream.

This is not exactly virgin territory for Benz, having applied their first hybrid treatment to the E-class back in 2012, and of course pure EV versions of the smart, SLS AMG, and newest B-class. However, these sedans do signal a broader PHEV strategy going forward.

The S550e is their first PHEV, and it’s been available since 2014. Like most plug-ins, it offers a variety of operating modes. Default is HYBRID mode; in which it operates as a typical hybrid, determining for itself when it’s most efficient to use battery power and when to engage the engine.

E-MODE runs on the battery alone for a claimed 12-miles at up to 75 miles-per-hour. Think of this as a city friendly mode. 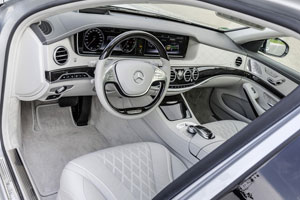 E-SAVE allows you to run strictly on the engine, saving your battery range for later use; and CHARGE mode will divert engine power to charging the battery back up to full, giving you another 12-miles of EV range.

Thankfully, the gauges make it crystal clear which mode you’re in.

All to make one of the most fabulously smooth hybrids we’ve ever driven.

Powertrain is a combination of a 3.0-liter twin-turbo V6 engine and an 85kW electric motor with an 8.0kWh battery pack that can be charged in 2½-hours on 240-volt current. Combined output is 436-horsepower and 479 lb-ft. of torque.

Everything works through a real 7-speed automatic transmission; in rear-drive only for the time being.

Acceleration is more than adequate, with a 5.2 second 0-60; but with the aforementioned smoothness, you really do have to keep an eye on the instrument panel to tell you where power is coming from. And while it will certainly get up and go if you ask it to, it’s much happier at a more relaxed pace. Left in HYBRID mode, it wants to be an EV as much as possible.

Benz keeps it classy outside, with just subtle updates to the handsome S-class form; fender emblems, blue accents on the LED headlamps, and blue brake calipers, though only in the front.

The charging port is on the rear bumper. Obviously done to avoid cutting a hole in any body panel. It’s actually quite convenient, though likely more susceptible to damage.

No concessions made inside however; it’s still one of the greatest places in all automotivedom to spend drive time.

Newest on the scene is the c; using the brand’s first 4-cylinder-based hybrid powertrain.

EV range is a claimed 20-miles, though for us, 17-miles was more typical.

With that much torque on tap, you’d expect it to feel quick, and it does. We hit 60 in 6.2-seconds; almost half a second quicker than the last C300 sedan we tested.

Like the S-class, there’s a 7-speed automatic, which works efficiently; keeping power lapses between shifts very brief. It finished the ¼-mile in 14.6-seconds at 97 miles-per-hour.

Also in similar fashion to the S-Class, there’s nothing anywhere approaching compromise inside, as the C-Class has become more-and-more like the S-class; you’ll certainly want for little in here.

It’s definitely an interesting time in the auto industry as we move from pumping fossil fuels to plugging in. And you know it’s serious when a brand like Mercedes-Benz makes the PHEV shift. Both of these cars are superior efforts, adding to a growing crowd of options that burn less petroleum. Whatever the future holds, we say, “bring it on”! After all, the good life is all about having choices.