In creating the Armada for 2004, Nissan followed the usual path of the times; cobbling together an SUV body onto an existing truck frame, to hurriedly satisfy a buying public hungry for full-size SUVS. Well, times have changed, and most large SUVS have moved on to more refined platforms. And now the Armada finally joins them…to a point. So let’s see if the 2017 Armada can deliver that refinement as well as all the goods.

The 2017 Nissan Armada rides high, wide, and handsome into a full-size SUV market that is primed for a bit of a renaissance; due to low fuel prices, many recently updated rivals, and with that the progressive refinement that has come to the segment.

After soldiering on with the U.S. made Titan pickup platform for 13-years, the Armada is now based on the Japan-sourced Nissan Patrol chassis, which kin Infiniti QX80 started using for 2011.

And you can easily see a Patrol, and QX80 resemblance; both in the rear ¾ and d-pillar area; and in overall stance.

So there’s not much outside to wow you; some might even call it bland compared to GM’s full-size team, but there’s something to be said for blending in more than standing out. 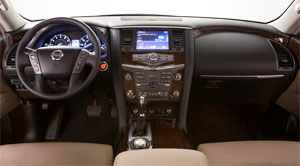 As for sitting down, there’s plenty of comfort to be found in the front seats, and leather seating is surprisingly standard.

As is seating for 8, though in platinum trim the second row 3-place bench can give way to dual captain’s chairs. With either, rear seat leg room is more than plentiful; it’s when climbing up and back to 3rd row that you realize why crossovers are the more family friendly choice.

We were a little disappointed to see the same basic center stack control setup that Nissan and Infiniti have had for years. We do love the functionality of it, but the screen looks very low-res compared to the competition; and they could have done a little more to dress it up considering its price tag.

Cargo capacity is in line with the rest of the segment, though short of extended rigs like Suburban and Expedition EL. There’s 16.5 cubic-ft. Behind the 3rd row, 49.9 behind the 2nd, and 95.4 with all of them folded. 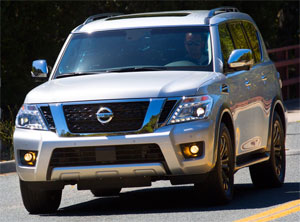 Now, if you’re familiar with the patrol, you know that like the Toyota Land Cruiser, it has some legit off-road credentials. It is an automatic 4x4 system, but there is also a 2-speed transfer case and limited-slip rear. While we sure appreciate it, we wonder how many Americans will ever experience the new Armada’s potential, though surely it will be more than QX buyers.

The engine is still a 5.6-liter V8, but it’s the latest Titan version with 390-horsepower and 394 lb-ft. of torque. A 7-speed automatic transmission replaces the previous 5-speed. And just as in the QX, acceleration is plenty strong and normal operating procedure is library quiet.

Towing capacity is 8,500-lbs. A class IV towing hitch is standard, as is a load-leveling rear coil-spring suspension.

Ride quality is not unlike the QX; stable, and lighter on its feet than anticipated for a nearly 3-ton machine. Huge side mirrors add to what is already very good visibility all around. 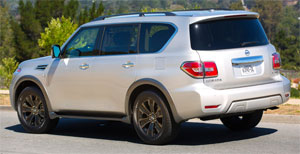 Nissan’s safety systems are still among the best, not being intrusive hardly at all; yet chiming in or helping out only when you absolutely need them. They were also an early pioneer in the around view monitor game; and it continues to get refined, now helping with tight off-road maneuvers as well.

The days of big numbers for big rigs may be long gone, but there is certainly still a market for them. It’s hard to see the 2017 Nissan Armada being a runaway hit; but it’s a big, capable Ute that should satisfy plenty of people’s needs for a comfortable, capable, and yes even a bit classy full-size family SUV.