Though the Nissan GT-R has been in almost a constant state of improvement since it arrived for 2009, for 2017 it gets its most significant update yet.

The GT-R has always been kind of an outlier in this kinder and gentler supercar realm we live in today; exhibiting drivetrain clunks, a hot cabin, and a host of unique sounds and smells as you’re going Godzilla on the pavement. Whether you look at them as design flaws or value-added character, says a lot about your love for mechanical things. But now the GT-R is somewhat trying to change with the times.

Starting outside, there’s a new face, in which Nissan insisted on injecting more of a V-motion theme. Thankfully, it’s fairly subdued with the “big mouth carp” look still mostly intact.

Changes are a little more overt in the rear, with the tall chunky real estate getting segmented more drastically with sharper lines, a few more creases, and new air vents nestled next to the exhaust tips. 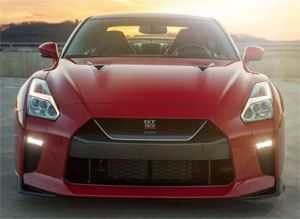 Body reinforcements and additional sound deadening materials have been added, which of course increases weight. So there’s a modest boost in power to compensate. The 3.8-liter twin-turbo V6 now puts out 565-ponies…up 20…and 467 lb-ft. of torque…up 4…and naturally to all four wheels.

Transmission duties are still performed by a 6-speed DCT, but the programming has been changed for smoother operation; great I guess, if you’re on your way to the golf course.

Further damping the viciousness, are comfier seats, a new leather instrument panel cover, and an updated dash that eliminates a number of the switches found on the center stack; aided by a larger 8-inch touchscreen.

Things are still relatively old school in appearance and ability, and the gauges are crude compared to the virtual TFT panels of most current high performance rides.

All has worked together to make the new GT-R a little more user friendly, but not dumbed down. 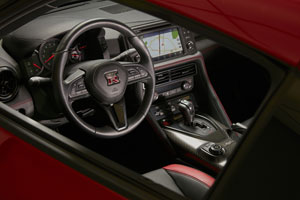 Like an extreme roller-coaster, it’s a thrill ride that’ll have you exhilarated, sometimes frightened, and when it’s all over wanting to do it again.

One bad move as far as we’re concerned, is Nissan moving the shifter paddles from the column to the wheel. Before you always knew where they were.

But, all is forgiven once out on the track, where despite the softer image, it still deals out serious hands of performance; shortening straights and sticking to corners with the best of them; blasting out of them like nothing else. And you can still hear plenty of engine audio and turbo spinning here.

This year also brings about a new Track Edition GT-R, which is essentially NISMO suspension without the NISMO engine upgrade. So it handles better, and still feels incredibly fast.

Here through the 9 high-speed turns of Georgia’s Roebling Road Raceway, it takes a lap or two for the tires to fully warm up; but when they do, there is lots of grip for exploiting.

Thankfully, all in all, this GT-R Track Edition still feels like some kind of Frankenstein stitched together of American muscle car, Asian economy car, and European exotic. 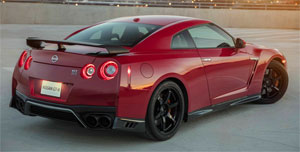 But is it still a little clunky and awkward on the street? Yep, but truth be told we wouldn’t have it any other way. It’s a character thing!

Second question, are the changes enough to draw in a lot more converts? Doubtful. More likely they are just what was needed to give current owners a reason to upgrade, and put a few more “gently used” GT-Rs on Ebay.

The Track Edition slides nicely in between the base Premium and NISMO GT-Rs at about $129,585.

The 2017 Nissan GT-R has certainly aged, and perhaps a little more gracefully now than before. But happily, with this new Track Edition it’s still the brutish track star that we remember, and still one of the most unique exotic rides out there. And it looks like it will stay that way for years to come.