The Nissan Pathfinder has always been a great family utility choice, and made even better when it became a 3-row crossover for 2013. It even won our driver’s choice honors that year. But with competition being what it is, it’s no wonder Nissan has quickly upgraded it, with hopes of making it even more desirable. So, let’s see if they succeeded.

Like many of you, we were more than skeptical when the 4th gen Nissan Pathfinder switched back to a unibody design for 2013. But it turns out we had no need to worry as it continues to have more capabilities than most buyers demand for this segment. Updates for 2017, only furthers their case for making the switch.

That ’13 Pathfinder quickly became one of our favorite 3-row crossovers, and after these upgrades, we still like just about everything about it.

Front seats remain a real high point, offering better comfort than both the Honda Pilot and GMC Acadia; and perhaps more importantly, there’s more room in the passenger side area for your partner to get comfortable. 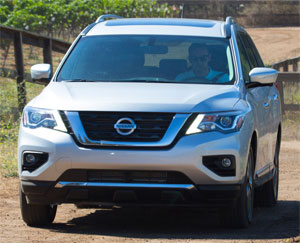 2nd row seats slide and recline easily, as well as fold almost fully flat, with barely any gaps in the load floor for things to fall through.

The list of standard features is substantial, and just about everything else you could want is available; including Nissan’s Around view monitor. While copied by many others, it’s still excellent here.

The dash design is clearly showing its age, yet remains brilliant in execution; with great blending of manual controls, central controller, and touchscreen.

On that, all trims now get an 8-inch touchscreen, and while the navigation graphics have also improved, they’re not “cutting edge” by any means.

There is plenty of small item storage, as well as places to keep things plugged in yet hidden. 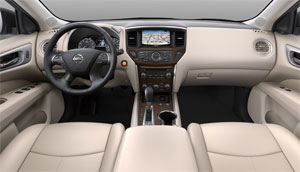 The ride is as great as it has always been, almost perfectly balancing a soft posture without rolling too much or feeling spineless in corners. Though it also feels older and heavier than some of its newer and lighter competition, and not quite as easy to whip around in tight situations.

But most will be bigger fans of the upgraded engine. Making an already great thing even better, Nissan has added direct-injection to the 3.5-liter V6, boosting horsepower up to 284; a gain of 24. Likewise, torque is up 19 lb-ft. to 259.

The power difference in noticeable, and it even sounds better.  Best of all, towing capacity is up 1,000-lbs.; now at 6,000-lbs, closer to full size SUVs than most 3-row crossovers. 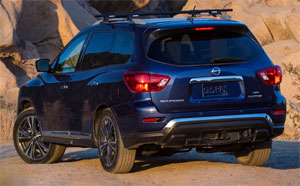 Upgrades to the CVT transmission are also obvious, with none of the looseness we experienced with our long-term Pathfinder.

The D-Step Logic Control imitates a true automatic better than ever; in fact, it tricked one of our test drivers into praising the transmission’s buttery smooth shifts.

Over the four years that it has been on sale, the 3-row crossover Pathfinder has not only stood up well to increasing competition, but lost none of its shine whatsoever. Actually, this new-and-improved edition is indeed better than ever.  What that means, is the 2017 Nissan Pathfinder is more than competitive with the rest in the segment; and will certainly help Nissan continue to gobble up more and more market-share.