In case you’ve been in a coma, a certain continuing science fiction saga went rogue recently. And while this Nissan Rogue, is strictly on sale in this galaxy for now, Nissan couldn’t resist the tie-in, as we all know that cross-promotion is where it’s at these days. So let’s find out if Nissan’s Rogue really does provide new salvation for crossover fans.

Now in its 2nd generation, the 2017 Nissan Rogue receives substantial updates, looking to build upon the market share grabbing achievements of the 2008 original. Consistently ranked among the top sellers in compact crossovers, it’s popularity is just shy of segment leaders Honda CR-V and Toyota Rav4.

There’s a freshened exterior; yes, featuring a more exaggerated version of Nissan’s V motion grille; all-new front and rear fascias, as well as signature boomerang tail lights. In short, what was already a good looking ute is now more so.

But there’s a host of new technology too, including this first-time Rogue Hybrid. 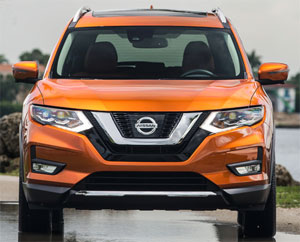 Hardware consists of a 2.0-liter I4 engine with CVT transmission, and a single 30kW electric motor; managed by an Intelligent Dual Clutch system. Total output is 176-horsepower, 5-more than the standard Rogue’s 2.5-liter non-hybrid engine, which carries over unchanged.

Operation is typical of most hybrids, both power sources working fully during acceleration, and the gas engine dropping out whenever it can. Which is not very often, as this system seems to be in electric-assist mode most of the time.

There’s very little “disturbance in the force” when changing power sources, though there are definite audible clues.

Hybrids are available in front and all-wheel drive; with AWD Government Fuel Economy Ratings coming in at 31-City, 34-Highway, and 33–Combined.  Though we averaged a somewhat disappointing 29.4 miles-per-gallon of Regular. All makes for a very good Energy Impact Score however, of 10.0-barrels of yearly oil use, and 4.6-tons of CO2 emissions.

The only other compact hybrid crossover currently available is the Toyota Rav4 Hybrid, in which we averaged 32.0 miles-per-gallon. 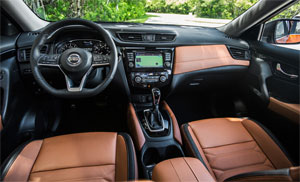 The interior environment is one area that previous Rogue’s have struggled with a bit. And while they’ve certainly improved over the years, this latest edition strives even further upmarket, and is now fully competitive with the best of its rivals.

The Rogue is one compact ute that still offers a 3rd row option, though not in this Hybrid due to the battery placement, but it does retain full folding seatback functionality.

While the Hybrid’s very compact batteries do impact the cargo room behind the newly available motion-activated lift gate; it’s still quite reasonable; 27.3 cu-ft behind the 2nd row, and 61.4 with it folded, although the load floor is fairly high.

Idle stop/start is also new, as is regenerative braking. Now it’s not the smoothest braking system we’ve experienced, but it’s far from egregious; and seems to do an efficient job of adding charge back into the batteries.

While few buyers of the Rogue Hybrid will ask about 0-60 times, holding up traffic is not high on anyone’s wish list. No worries here, as the Rogue gets off the line pretty swiftly to 60 in 8.8–seconds; a tenth quicker than in our last Rogue test. 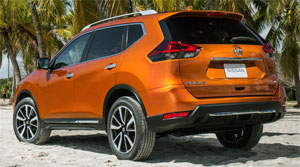 Progressing down the track, the CVT keeps that engine noise coming; though power delivery is more deliberate than accumulating.  The ¼-mile ends in 16.8–seconds at 84 miles-per-hour.

Braking performance, with stops averaging a short 114-feet from 60 was good, but there was a lot of ABS pulsing through the pedal.

Handling was more of a bland affair, with direct steering but short on feel, and moderate body roll; as long as you stay beneath the limits of the eager-to-engage traction control system.

Nissan has been on an upward move of late, and we see no reason why that won’t continue, due in part to the nicely improved 2017 Nissan Rogue. As for the new Hybrid, while it’s not the only one among its small crossover peers, it is the least expensive, which should expand the Rogue’s appeal even further.  So this Rogue “saga” is for real, and it’s far from over.