Nissan fans are well aware of Nismo, Nissan’s factory performance tuning outpost. Not only have they upped the performance of sports cars like the Z and GT-R over the years, but they’ve weaved some magic into more mainstream fare like the Juke and Frontier as well. Well, it doesn’t get more mainstream than the compact Nissan Sentra. So, let’s find out what wonders Nismo can work here.

For 2017, NISMO does indeed turn their attention to the humble Nissan Sentra sedan, hoping to inject a little excitement into a line that hasn’t had much since the last Sentra SE-R Spec V.

This spunky Sentra shares the Juke NISMO’s 1.6-liter I4 turbo engine, outputting the same 188-horsepower and 177 lb-ft. of torque. Now, that may not sound very brutish, but it’s 58 more horsepower than you’ll find in a standard Sentra.

Even better news, there’s a 6-speed manual transmission. Nissan’s Xtronic CVT is also available, with unique tuning, but the thought of going that route just makes our skin crawl.

The suspension builds upon what the SR Turbo Sentra started, adding monotube rear dampers and upgraded front springs and struts. 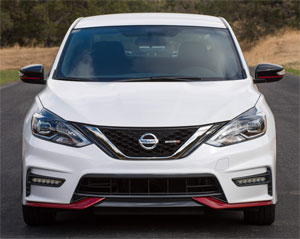 The electric power steering is reprogrammed for quicker response when turning the NISMO 18-inch alloys. Buyers can replace the all-season Michelin Pilot Sports with Bridgestone Potenza summer tires if they choose.

The package makes for a fun time on your local back roads, but didn’t quite hold up as well as we expected at the test track.

There’s still a considerable amount of body roll, and when pushed hard the chassis and suspension don’t seem to be on the same page. Furthermore, we found steering numb and slower than we’d like.

Yes, it is way more dynamic and capable than any Sentra we’ve been in lately; but handling still falls well short of what we expect in a sport sedan.

When it comes to acceleration, there was not enough NISMO and a little too much NISSLOW. The engine is willing and ready to rev, but the clutch catches so high in the pedal travel, that it’s tricky to get a good launch. Combine that with a hair trigger throttle, and it’s all or nothing off the line.

And while it felt like the 7.6-second trip to 60 was a lengthy one; consider that it took over ten seconds to accomplish that in the last Sentra we tested, so it is quite an improvement. 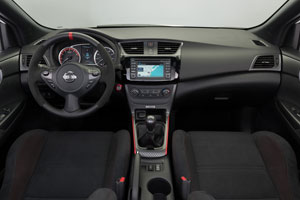 Also, the manual shifter works well, with mid-range throws and good precision. Those shifts will come at you quickly, as you dart your way down the track; wrapping up the ¼-mile in 15.6-seconds at 93.0 miles-per-hour.

Braking was a real highpoint, averaging stops of just 100-feet from 60. The brakes bite hard right from the get go, and never let up from there; there was great stability throughout our runs.

We wish Nissan would have paid that level of attention to the Sentra’s interior. We heard quite a few errant noises from our cars dash; and infotainment fitment appears aftermarket at best. Still, there are notable NISMO touches.

For one, the NISMO sport seats have fairly aggressive bolstering, there’s red trim and stitching throughout the space, and the driver gets to grip an Alcantara steering wheel while looking at an upgraded gauge cluster.

There’s still a lot of people room inside this Sentra too, and seat comfort in all positions remains high.

Outside, NISMO add-ons also get high marks, transforming the Sentra’s soft, bulbous form into a real hot rod. There’s an aggressive front fascia, as well as both black and red trim throughout the body.

There are aero treatments of course, including unique side sills, rear fascia and spoiler; as well as a new exhaust tip. Standard LED DRLs, chrome door handles, and NISMO badging complete the lively little package.

Government Fuel Economy Ratings are 25-City, 31-Highway, and 27-Combined.  We averaged a great 32.0 miles-per-gallon, though this little turbo does require Premium. That makes for a slightly better than average Energy Impact Score burning 12.2-barrels of oil yearly with CO2 emissions of 5.5-tons.

It’s easy to criticize that this Sentra isn’t quite the NISMO we were looking for, but when you consider that the base pricing is only $25,855, Nissan’s thinking makes a lot more sense.

So, the 2017 Nissan Sentra NISMO may not be as aggressive or track-worthy as many young hot-rodders tend to look for in a sport compact, but it is certainly a highly evolved Sentra, and a much more entertaining one than we’ve had in quite a while. Plus, it keeps all of the roominess and most of the comfort that the Sentra is well known for, making it a “NIS-MARVELOUS” small car choice.