Last year, Nissan made quite a splash with the full size Titan XD. A brawny, V8 turbo diesel truck aimed squarely at the sweet spot between light and heavy duty pickups. Well, now comes the ever more important ½-ton titan. As the volume entry against the big-3, let’s see if they have anything to worry about.

Surely you’ve seen a lot of Nissan Titans on the road, but this full-size truck has only been a modest success for the brand. And, there were rumors it might not be redesigned.

Well, bury that thought. Clearly Nissan is after a much larger piece of the full-size truck pie with a gen two, ground-up Titan redesign for 20-17.

Now, bowing to reality, Nissan doesn’t expect to lure away many die-hard Ford, Chevy, and Ram buyers. But, rather attract first-time big-truck buyers, especially import brand owners, with a fresher full-size entry. Although, all Titans are U.S. built, assembled in Canton, Mississippi. 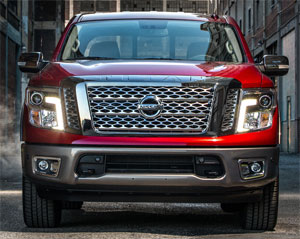 On the road, Titan feels every bit as solid and formidable as its domestic competition, but when you arrive in the parking lot or a tight driveway it feels more maneuverable.

You might think it would feel less powerful than the larger XD diesel, but with a whopping 1,500–lbs. less weight to haul around, it feels every bit as menacing. And it can do almost as much work, towing up to 9,390-lbs.

The look is big truck cumbersome, though surely Nissan would prefer to call it bold. Having much more in common with the XD than the previous Titan ½-ton. But there’s 11.8-inches less wheelbase, and about 15-inches less to overall length than the XD. And even with a more macho appearance, aerodynamics are 10% better than the original Titan.

Platinum reserve trim is available to appeal to luxury minded buyers and the PRO-4X for the rugged types. The latter includes 18-inch wheels with 275/70 A/Ts, Bilstein shocks, skid plates, and a locking rear diff.

The new Titan is available as Crew Cab only at launch, with a 5½-foot bed; a foot shorter than the XD, but King and Single cabs will follow shortly, with beds up to 8-foot. 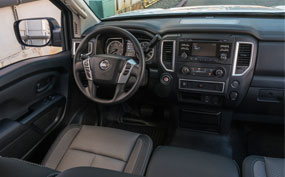 Stepping up into the driver’s seat, you’ll find plenty of comfort for long hauls, as well as lots of big knobs on the center stack. Here, things are mostly the same as in the XD, with just about every convenience feature you expect available; including navigation, heated and ventilated seats, heated steering wheel, Around View monitor, trailer brake controller, Rockford Fosgate audio, and even remote start.

The crew cab’s Rear seat area is incredibly roomy, and those seats are configurable for both seating and multiple storage options. Plenty of bins and big cup holders are found throughout the cabin too.

4x4’s get a traditional part-time setup with dash mounted selector, as well as a bit more ground clearance. Titan can handle a wide range conditions, and feels very rugged when banging through obstacles.

Power builds gradually all the way up the tach, until shifts happen quickly with little loss of momentum. 15.8-seconds was our best ¼-mile time at 92 miles-per-hour, with a nice low growl from the exhaust.

Handling was very similar to the rest of the full-size brigade; top heavy and slow to react. No better or worse than any others we’ve tested.

Steering felt a little heavier here than expected, but this PRO-4X is geared more towards romping over things, than scooting around them.

Government Fuel Economy Ratings are 15-City, 20-Highway, and 17-Combined, we only managed a 16.2 miles-per-gallon average on Regular. So the Energy Impact Score is quite poor at 19.4-barrels of annual oil use, along with 8.7-tons of CO2 emissions.

We doubt the Big-3 or even Toyota will admit that Nissan’s new Titan is a concern. Still, we think they are heading in a smart direction; both with this volume-leader 2017 Titan, and the heavier duty Titan XD.

And, we also think even the most jaded truck owners could find a lot to like in the new Titan lineup. Plus, now there can be no doubt; Nissan is in the full-size truck game to stay.