When the Boxster-based Porsche Cayman hardtop launched for 2006, it was just what the doctor ordered for Porsche fans who felt the 911 had gotten too expensive, and too far away from its simplistic sports car roots. Well, now there is reformulated Cayman for 2017, and truth be told, it is not a simple concoction at all. Even its name is more complex. But, if the side effects are more fun, should it still be the Porschphile’s drug of choice?

The 2017 Porsche 718 Cayman and Cayman S continue be developed with the Boxster roadster. Believe it or not, the mid-engine chassis they share has been around for 20 years and is now in its 3rd generation.

So, why complicate things by adding 718 to the name? Well, Porsche fans are well aware that the 718 was a mid-engine 4-cylinder racecar that made its debut at Le Mans in 1957, and raced very successfully into the 60s. So, there is real heritage there.  Plus, now you’ll also have a cool number to casually drop just like your 911 buddies.

So yes, the new Cayman and Boxster are now powered only by 4-bangers. But as you might expect, they are not your average 4-cylinders. 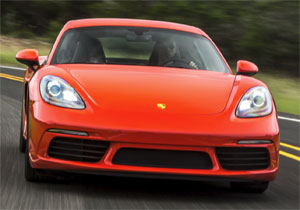 Beyond engines, most of the Cayman’s body panels are new; resulting in a wider, less bulbous look; that demands to be taken more seriously.

Cayman and Cayman S both have a fully re-tuned chassis that promises to offer both more comfort and more capability. PASM sport suspension, with a lower ride height is an option on the Cayman S.

Brake size has also increased, nestled behind the 20-inch wheels on our Cayman S test car.

Thanks to primed and ready turbo, response from the Cayman S engine is immediate, whether you’re tooling around town, or sweeping through switchbacks. Of course now it sounds like a 4-cylinder and not the wonderful flat-6, but that’s progress, I guess.

Despite the loss of 2-cylinders, weight is just about the same, and thus it still exudes the tremendously balanced feel that only a mid-engine sports car can. 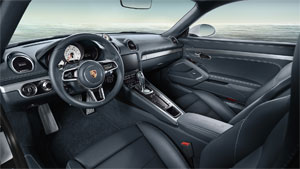 Inside, there’s a mix of old and new; with the most obvious update a new dash design and improved connectivity with Porsche’s Communication Management interface.

And as before, mid-ship engine placement leaves plenty of cargo room both up front and in the rear.

To get a better sense of what it’s all about however, requires a lot more speed, and a place to do it safely. Of course for us, that means Savannah, Georgia’s Roebling Road Raceway.

Where, just about every one of our driver’s comments revolve around how balanced this car feels through Roebling’s 9 fast turns.

Steering is more direct and accurate than before, a feat we wouldn’t have thought possible.

In fact the whole car feels and is faster, both when getting through corners and propelling out of them. Power delivery is linear to the extreme. It’s just always there; never wavering, never peaking.

The PDK transmission works as good as ever, as it always seems to have the car in the perfect gear. The redone suspension keeps this car glued to the track, particularly with our car’s PASM upgrade.

There’s no drama at all when it came to braking, as the binders worked with quiet precision lap after lap. Good initial bite, great feedback throughout.

Sure, the turbo-4 feels great on the track and has better engine output numbers than the previous 6, but does that translate to straight line superiority as well?

Of course it does, with our 718 Cayman S shooting to 60 in 3.8-seconds, with the ¼-mile being annihilated in 12.2-seconds at 116 miles-per-hour. Both numbers about half a second quicker than the Cayman GT4 we drove here last year.

Bottom line, this new Cayman outperforms its predecessor by almost every measurable mark.

Of course, seeking better  fuel efficiency was the real reason behind the switch from 6 to 4. Even with more power than the 6, the Combined Government Fuel Economy Rating for the 20-17 Cayman S PDK remains at 24 MPG on premium.

So, do we love the reformulated 2017 Porsche 718 Cayman more than the Cayman it replaces? Probably not, but we certainly love it just as much, despite the engine switch. And, sorry 911, we do believe it is now the best new car choice for the quintessential Porsche driving experience. So overall, consider this 718 a successful transition of power.