The Porsche 911 Carrera has been many things to many people over the years. But up to this point when you told someone you had a 911 Turbo, they knew exactly what you meant, the top dog, all-wheel-drive, performance machine that was the ultimate 911. Well, prepare for confusion and possibly mass hysteria, as all 911’s are turbos now!

Everyone hates a know-it-all, but no one seems to mind having a “do-it-all” like the Porsche 911 Carrera around. It’s not all-new for ’17; still the 991 chassis that debuted for 2012, and in Porsche fashion has been continuously refined since. But this is the first time it has been comprehensively gone over.

Of course the big news is turbo power only from here on out. And if things keep going this way, it won’t be long until non-turbo engines are a thing of the past for most brands.

The Carrera S no longer gets its own engine, rather bigger turbos on the same 3.0; and an increase of boost to 16-psi. Horsepower in it, is 420.

There’s no lack of torque down low in either; Porsche claims a 3.7-second 0-60 time for the S, 4.0-flat for the base Carrera, but the fun really starts happening up higher in the band. 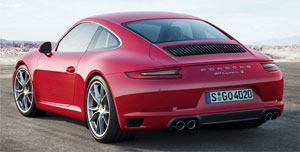 None of this is really a stretch, since few brands are associated with turbos more than Porsche. And this engine sings a familiar Teutonic tune, it’s incredibly responsive, yet still smooth as silk with the power delivery; and we’re sure tuners are chomping at the bit to easily dial up even more power.

Not only are all 911s turbos now, but they’re all dual clutches; as even the 7-speed manual, which thankfully remains standard, gets a new twin-disc clutch that feels great, though take-up is still rather high. The shifter is light, but works with the precision that you expect. A refined 7-speed PDK is still an option.

The exterior sees perhaps the smallest changes, just new bumpers and LED lighting front and rear. There’s a new front splitter, and everything is designed to channel more airflow for cooling the turbos; including active cooling flaps, and an adaptive rear spoiler that funnels air into the engine bay as well as creates downforce.

There are plenty of trickle-down goodies from higher 911s, like the rear-steer available in the S. But the trickest feature may just be the Sport Response Button on PDK models, which gets maximum performance out of all aspects of the car for 20-seconds when pressed.

The sound is indeed a bit different, but not enough to change your mind one way or the other; still guttural, and amazing to us. You won’t notice it’s a turbo unless you know what to listen for; and if you do, then you’ll appreciate all of the unique sounds as much as we do.

Of course the purpose for the whole turbo exercise is for better Government Fuel Economy Ratings; now 20-City, 29-Highway, and 23-Combined, that’s up one, for the manual; 22-City, 30-Highway, and 25-Combined, a gain of two, for the PDK. 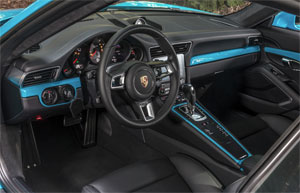 The standard 991 chassis is updated with new dampers, springs, and anti-roll bars; and with PASM now standard, ride height is lower by half an inch.

Throughout our Northern California drive time, we found the steering feel the same as before; which is good. We’ve never found fault with it unlike on some other sporty Germans. Still nice and direct, with seamless on the fly adjustments.

Ride quality also is the same; firm, but still very compliant over bumps. Acting just like a 911 should, well-balanced and athletic.

Power remains athletic as well, but the turbo-style torque delivery makes gear selection less critical, and almost unnecessary once at speed. Pre-loading the turbos as you coast through corners, means there’s no big hits of power to upset anything.

Seats are beyond comfortable, with lots of adjustments, fitting the 911’s more GT mission of late; one of the many highlights of the great looking interior.

The biggest takeaway from our first drive of the 2017 Porsche 911 Carrera, is that as much as it has changed, it hasn’t changed at all. It’s still a “do-it-all” that represents everything that’s right about German sports cars. So fear not Porsche-philes, get behind the wheel; and you’ll find out like we did, the proof is in the driving.