There’s no doubt that Porsche’s relentless refinement has been a major key to their success over the years. Another is giving people exactly what they want. Entry level 911 Carrera, they have that; need a little more, there’s the S, more still, that’s where the GTS comes in.

You could think of the 2017 Porsche 911 Carrera GTS as a better version of something that was already awesome; or you could also think of it as a car that fills the gap between the Carrera S and 911 Turbo. You’d be right on both counts.

The results are not a huge difference, but enough to be noticed when you lay into the throttle.

Transmission choices remain the standard 7-speed manual or optional 7-speed PDK. We were thrilled to have our test car sporting the manual, even though we are well aware that cars equipped with PDK are a tad quicker. 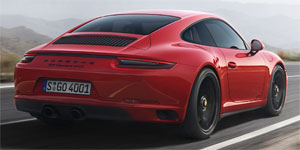 Porsche claims 3.4-seconds to 60 for that one; so a 3.9-second run to 60 in this manual rear-drive Coupe is not that bad at all. The car does provide some assistance, by holding the revs at 4-grand for you; you just can’t launch as hard as you can in the PDK.

But from there, the car tears down the track like it’s on a mission. As great as the shifter feels when tooling around town, here at the track, with so many gears packed into such a small space, working the shifter requires a touch of patience; as it’s easy hit 5th when you’re aiming for 3rd. Do everything just right and you can clear the ¼-mile in 12.2-seconds at 118 miles-per-hour.

But we all know that the kind of tracks that Porsches take to the most are ones with lots of curves in them. So, it’s off to Summit Point Motorsports Park for a few laps around their Shenandoah Circuit.

Through its mix of high speed sweepers and tight corners, this GTS stayed very flat. And if you can avoid the slight turbo-lag, it flies out of corners with a ton of torque.

Rear-axle steering is not standard, but it was added to our test car, and really helps the car rotate eagerly around corners; though you can still find some mid-corner understeer in tight bends.

As always, Porsche’s stability control system works almost seamlessly behind the scenes, making you feel like a real hero without ever being heavy-handed with the corrections. 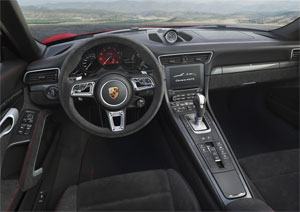 No upgrades to the brakes, and they worked just fine; though the pedal did get a little soft after a full day of track work.

Away from the track, the GTS behaves exactly like you think a 911 should; very firm and responsive with a great engine growl.

Visually, the GTS is not in your face with its enhanced credentials. It starts with the Carrera 4’s wide-body sheet-metal and adds a SportDesign front fascia, tinted tail lights, blacked out logos and trim, a rear spoiler that extends a little higher than the Carrera S, and center-lock wheels.

Indeed, all-wheel-drive is available; as are Coupe, Convertible, and Targa bodies.

We’re particularly fond of the Targa; a good call on Porsche’s part to replace the silver roof pillars with black ones.

There’s no sacrifice in comfort with the additional performance, though things inside have taken a bit more of a business-first approach with less luxury than we’ve seen in some recent 911s. The usual amounts of Alcantara trim are scattered about and Porsche actually took out some sound deadening so you can hear the sport exhaust system a little more clearly.

Government Fuel Economy Ratings are 18-City, 26-Highway, and 21-Combined. Our average was on the low end, at 18.4 miles-per-gallon of Premium. That’s only slightly below average for the Energy Impact Score, burning 15.7-barrels of oil yearly while emitting 6.9-tons of CO2.

Perhaps no one straddles the tradition/continued refinement fence better than Porsche. This 2017 911 Carrera GTS, with its additional performance delivered with old-style feel, encapsulates that ethos fully. Sure there are faster Porsches, and of course cheaper ones as well. You could make an argument that the GTS is the best overall 911 package. And you’d get no argument from us.