9-5-9. To a Porschephile, those numbers have an almost mythological meaning. Introduced in 1986, the Porsche 959 was the most extreme evolution of the 911 platform, and is widely regarded as the world’s first modern supercar. But 30 years later, how does it stack up against the reigning king of the 911s, the 2017 Turbo S? Well, our inquiring minds want to know!

Without question, the Porsche 959 was the most advanced road car of its time. In addition to tire pressure monitoring, anti-lock brakes, and a 6-speed gearbox; the 959 also employed all-wheel-drive with driver-selectable torque split, adjustable ride height, hollow-spoke magnesium wheels, a super-aerodynamic aluminum and Kevlar composite body, and even floors made from fireproof Nomex.

But seeing the 959 now, is like stepping into a time warp. The slick aero body looks soft and slightly bloated next to this 2017 Porsche 911 Turbo S; and the very ‘80s striped leather seats seem as dated as a “Members Only” jacket. 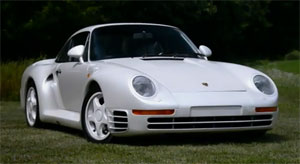 The 959’s 2.9-liter flat-6 was a derivative of Porsche’s racing engine, and featured air-cooled cylinders with water-cooled heads. Sequential twin-turbos smoothed power delivery across the rev band; and the output of 444-horsepower allowed a 0-60 sprint of just 3.6-seconds, enroute to a top speed of 195 miles-per-hour.  Numbers that still embarrass many of today’s sports cars.

This 30-year-old machine has covered barely 5,000-miles since new. It fires up quickly and delivers a familiar, but hardly menacing, Porsche melody.

But take a row through the gears out on a track, and you’d better be ready; as the tach spins past 5,500, and the boost comes on with a rush. After all this time, the 959’s performance is still impressive; even when driven at the moderate pace we promised to its owner.

Now, this 2017 Porsche 911 Turbo S is an ultra-modern technology tour-de-force; with a host of stability and traction aids, that are just as cutting-edge now, as the 959’s were then. 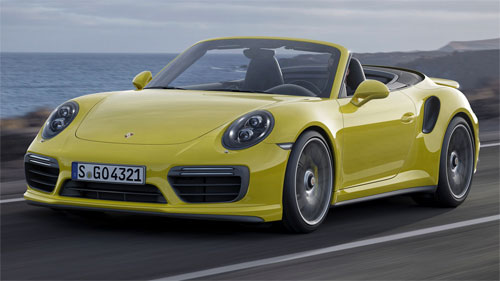 It has been criticized for sounding too tame, and we agree; but with 580-horsepower and 516 lb-ft. of torque on tap, this 911 Turbo S would crush the 959 in an all-out track dash, along with all but the most track-focused of today’s super sports cars. The 911 Turbo’s unflappable composure at ridiculous speeds, makes heroes out of mere mortals; and still sets the standard by which all sports cars should gauge themselves.

That animalistic, ill-handling nature you’ve heard stories about, went away years ago, along with air-cooling. Now a new Dynamic Boost system electrically keeps the turbos spinning when you ease off the throttle, so they’re ready to feed power once you get back on the gas, virtually eliminating turbo-lag.

As always, PASM, which gets new calibrations to differentiate the drive modes a bit more, does a masterful job of reigning in your poor driving habits.

By the same token, you know steering is electric assist; but it feels no different than it always has. 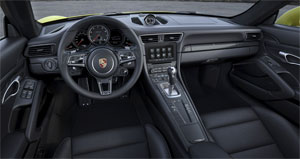 The 911’s body has grown dimensionally, yet retains the instantly recognizable classic squashed Beetle shape. Its 96.5-inch wheelbase is 7.0-inches longer than the 959; and it also stands a few inches longer, wider, and taller.  Not to mention, 387-lbs. heftier than the 959.

Turbo-charging is nothing new for Porsche of course; but now that all 911s are turbos, what sets the Turbo S apart?

Well, as it has been since 1975, the Turbo model is the pinnacle of Porsche engineering.

Now based on the 991.2-chassis, the Turbo gets the full wide-body treatment, bigger air intakes, more prominent rear wing, and unique headlights. But the overall look is fairly restrained, compared to previous Turbos.

Mechanically, the Turbo gets a bigger 3.8-liter flat-6, with 540-horsepower and 486 lb-ft. of torque. The Turbo S is next level, naturally; at the aforementioned 580-horsepower. Max torque with over boost is 553 lb-ft. 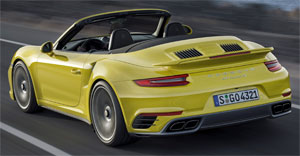 Just about all suspension and drivetrain components get a total re-work, as do all of the electronics that manipulate them. All-wheel-drive is standard; as is the 7-speed PDK transmission, which is currently the only gearbox available.

And just as in the engine compartment the Turbo S features further upgrades including ceramic composite brakes.

Even though they lost a lot of money on each of the 337 they made, the 959’s value as a showcase for the company’s technical and engineering prowess was enormous. The momentum from the 959’s critical acclaim, propelled Porsche to the top of the sports car market; and paved the way for incredible machines like this 2017 Porsche 911 Turbo S.

The Porsche 959’s aura has lost none of its luster after 30-years. It still stands as a performance benchmark for the ages; for all others, and especially Porsche itself, to measure up to.