We all know that car makers are on a mission to increase fuel economy in all of their vehicles, mostly because of ever-stiffening regulations.  Well increasingly, PHEVs are the hot ticket to get that done.  Even Porsche is not immune to this, having applied the plug-in treatment to the Panamera sedan back in 2014.  But now they’re getting much more serious, and what better vehicle to showcase that ultimate eco-performance in, than the Cayenne. 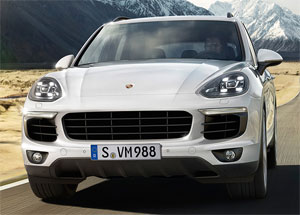 Yes, it’s all about the utilities in the luxury market these days; so this 2017 Porsche Cayenne S E-Hybrid will almost assuredly drum up its fair share of attention.

Now, some might still look at a plug-in hybrid utility as a bit silly, perhaps even a waste of money; but keep in mind these vehicles are mostly designed for a European market that aims to do away with the internal combustion engine in major cities.

So, obviously there’s a market for people who want to maintain their current level of posh transportation, yet have the benefits of an EV when necessary.

The 10.8kWh battery allows for 14-miles of EV-only driving at speeds up to 78 miles-per-hour.

Both an 8-speed tiptronic automatic transmission and all-wheel-drive are standard.

Like the best of plug-ins that we’ve sampled, the Cayenne delivers seamless operation; requiring you to keep an eye on the tach or power meters if you care where the power is coming from.

You can be certain that Porsche wants to preserve their performance image at all costs, so this Cayenne is indeed very fast; especially when the battery is full and boost mode is available, a bit less so without battery assistance. 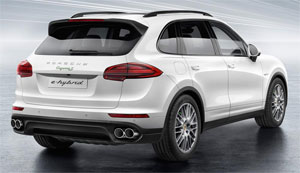 At the track, with all systems full-go, we hit 60 in just 5.4-seconds.  That’s almost two seconds quicker than the no longer available Cayenne turbo diesel.

There’s a decent amount of torque at launch, and it builds even more as you get rolling.  Shifts were not PDK-quick, but efficient enough to keep the gears coming, as we finished out the ¼-mile in 13.9-seconds at 103 miles-per-hour.

And as spirited as that is, it gets even better when you start throwing curves at it.  Through the cones, we found little to no over or understeer; just great balance and point-and-shoot precision, with virtually no body roll to upset things, despite pushing 5,200-lbs of curb weight.

Steering is quick, and sure it could use a little more feel; but no matter how hard we pushed this Cayenne, it seemed to be begging us for more.

Porsche likes to differentiate their plug-ins with Acid Green brake calipers, and little else.  And while they tend to look cool accompanying a silver or black vehicle, most thought they clashed with our Cayenne’s Mahogany Metallic livery.

That aside, the Cayenne’s form really hasn’t changed all that much in its 14-years on the streets.  There are still plenty of 911 design cues, combined with a sleek profile that fully portrays its performance potential. 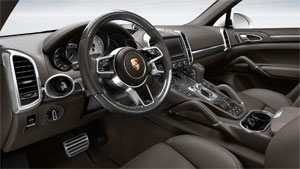 The interior is busy, but well laid out as always.  There are unique gauges and drive mode setup, but otherwise things are mostly the same throughout the rest of the space.

Government Fuel Economy Ratings are 22-Combined when operated in gasoline only mode; and climb to 46-Combined when EV driving is added in.  Our loop was an EV-free one; still we managed 23.0 miles-per-gallon of Premium.

There’s a great Energy Impact Score of just 9.5-barrels of annual oil use, accompanied by 4.3-tons of CO2 emissions.

We can surely appreciate the effort and engineering that went into creating the 2017 Porsche Cayenne S E-Hybrid.  But really, at this time, at least in this market, like a lot of other luxury plug-ins, it remains a niche vehicle built for boasting your ecodentials more than being a must-have vehicle.

In our eyes, it needs a much bigger battery, with much more EV range, for it to truly make sense here.  Ah, but it still drives like a Porsche.  And after all, that may be more than enough reason for this clean-rolling piece of engineering excellence.