The 2017 Toyota Prius Prime offers more, but not too much more, than the typical hybrid; though it certainly offers more than the Prius plug-in that it replaces.

By way of explanation, the EV-only range of the Prime is now 25-miles at up to 84 miles-per-hour. That’s double the range it claimed before, but still only half of the Chevrolet Volt’s EV range.

The mileage increase comes by way of both powertrain updates, enabling both motor-generators to now power the car, and a larger 8.8kWh lithium-ion battery.

The gas engine itself remains the same 1.8-liter Atkinson-cycle I4; and combined system output continues at 121-horsepower. 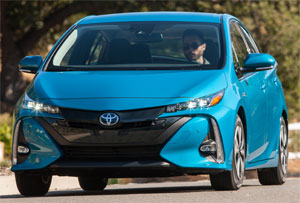 Government Fuel Economy Ratings are estimated to be 55-City, 53-Highway, and 54-Combined; with an EV-mode MPGe rating of 133.

Charging time is a bit over 2-hours on 240-volts; about 5½-hours on standard 120. But, the battery never gets fully depleted, as normal Prius operation kicks in when EV-only range is reached. Toyota puts total range before plugging in, or topping off, at 640-miles.

The Prius Prime’s new mission calls for a new look; as both front and rear styling are distinctive from standard Prius fare.

Sharper lines, a black facia with bigger air intakes, and ultra-low profile LED headlights portray both a more eco-conscious look, and at the same time, add some sporty flair as well.

Wheels are 15-inch alloys, but with 2-tone covers that are designed to maximize air flow.

In back, things are very different with full-width LED taillights, a dual wave rear window, and a carbon-fiber rear hatch.  Primarily in place for weight-saving, it also makes opening a little easier. Space beneath it, is taken up somewhat by the larger battery pack, reducing cargo capacity from 27.4 cubic-ft. to a still good 19.8. 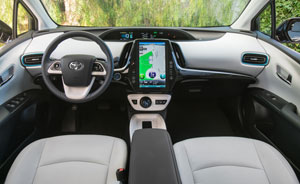 Nothing major stood out to us in terms of ride quality, during our drive time in Southern California. Prime feels smooth and composed over just about any road surface.

There is about 300-lbs. of additional weight; you won’t really notice it so much in handling situations, but you can certainly feel it off the line. There’s a lot of buzzing and whirring going on, but not much propulsion; expect a 0-60 time of 10 seconds plus.

Shuffling between power sources remains as seamless as always; and at cruising speeds, except for some tire noise, things are pretty quiet. Visibility remains very good all around.

Overall, the interior is just fine, even if our car’s, heated, simulated-leather covered seats were still not truly long distance comfortable. There are a host of tech upgrades for Prime, and trim structure differs from the standard Prius; going from Plus to Premium to Advanced. All except for Plus trim sport a larger Tesla-like 11.6-inch central touchscreen. It really blends in quite nicely and looks great. But we found actual function to be a little laggy.

There’s only adequate width for two in the rear seat, but plenty of leg room to be found, even if the slopping roof takes a toll on adult headroom. 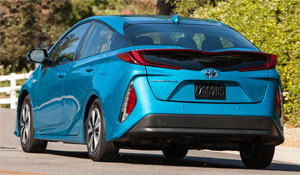 While the Chevrolet Volt may offer more range, the Prime has quite an advantage when it comes to pricing, as it is still a very reasonable $27,965. Whether that’s worth the $2,400 over a base Prius depends on your green driving desires. Top level Advanced trim moves closer to Volt at $33,965. Regardless, the Prius, in all of its iterations remains a lot of eco-minded car for the money.

With that being said, it’s hard to envision the 2017 Toyota Prius Prime being a major player.  As it still seems to appeal to the few people who want a bit more battery range than a traditional hybrid can offer, but aren’t yet ready to make the jump to a full EV. But there’s no denying it’s a better option than the preceding Prius plug-in, which may be enough to make it a “prime mover” for the Toyota faithful.