Volkswagen has a host of big and even bigger crossovers hitting the market. But if you really don’t want to go “big”, and think that a compact all-wheel-driver would fill your needs; than may we suggest setting your sights on the Golf Alltrack. A 5-door wagon that is a true all-weather, all-road runabout.

The 2017 Volkswagen Golf Alltrack follows a simple formula used by Subaru, Volvo, and even AMC’s Eagle if you want to go way back. Take a station wagon, jack up the suspension, make some form of 4x4 system standard, add a touch of exterior ruggedness, and voila; a fun little all-wheel-drive 5 -door that’s as easy to drive as it is capable. That’s the VW Golf Alltrack.

Like the Golf SportWagen that it’s based on, output from its 1.8-liter turbo I4 engine is modest, at 170-horsepower. But its 199 lb-ft. of torque helps it feel much peppier.

In the spirit of VW, a 6-speed manual transmission is standard; the option being a DSG automatic, also with 6-gears.

Things we’ve always praised about the Golf, including its super-solid feel, very little noise intrusion, and fun disposition, are all still here. Add in that you now sense you really can go just about anywhere in the Alltrack, and you’ve got a real winner. 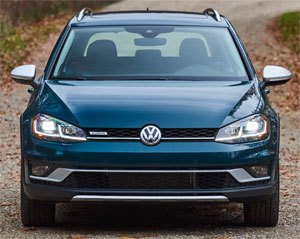 We still think VW’s pop-out badge hatch release is brilliant, and were further impressed once we opened it up to find a very deep, unobstructed cargo space. There’s 30.4 cubic-ft. for filling up with stuff; 66.5 if you fold the seatbacks down. That’s just short of most compact crossovers; and much more than the typical subcompact utility.

As for the driver’s space, there are some special touches to help it feel a step above the SportWagen; including nicer materials and updated trim. It’s not SUV roomy, but there is adequate space to get comfortable up front, as well as more than expected room in back.

The touch screen interface doesn’t cut the edge as much as it once did, and the whole dash theme looks a bit outdated. For 2018, Alltracks gain an upgraded screen with more features.

VW still leaves plenty of manual controls however, and they all work very well.

More personality has been added outside. Now, we’d stop short of calling Alltrack truly rugged looking, but we very much like the brighter cladding over the usual black, as it helps it to look more outgoing, perhaps even classy; think remote country club, more so than back country. Ground clearance is up only 1.4-inches over the SportWagen, at 6.9. 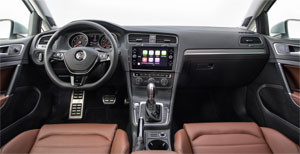 And that does take away from the typical Golf handling experience somewhat. Body roll is not that much more pronounced, but we did experience a lightness to the rear that gave us pause at first.  Until we realized that we were really flying through here.

So there’s no arguing, it remains highly capable; it just doesn’t have that nailed down feel we’re used to; perhaps we still had thoughts of GTI in our heads when we took to the slalom course.

While the engine is willing, there’s some hesitation at launch; as the car seems to be questioning your motives when you go full throttle. Once we got it rolling, we managed to hit 60 in a fine 7.4-seconds.

That same tardy feel exists in the transmission as well, really stretching out shifts. 15.8 was our best ¼-mile time, at 88 miles-per-hour.

We’d consider a 122-foot average stopping distance from 60 a touch long these days, but we did find the Alltrack to be very stable, and the brake pedal had a nice firm feel.

As for when the going gets rough, an off road setting has been added to the drive modes. It modulates traction-control and hill decent control to match rougher terrain. Together with the already capable 4Motion all-wheel drive system, you do feel kinda unstoppable.

On that note, active safety including automatic emergency braking is available.

Government Fuel Economy Ratings for an automatic Alltrack are 22-City, 32-Highway, and 26-Combined. For a slightly better than average Energy Impact Score of 12.7-barrels of annual oil consumption, and 5.7-tons of CO2 emitted.

We’ve been waiting for quite a while now, for a true Subaru-fighter to emerge; and while this 2017 Volkswagen Alltrack certainly qualifies, and there’s a lot to like about it; many will find it hard to justify the step-up in price. Still, no Subaru delivers driver satisfaction like a Volkswagen. So, just like the rest of the compact Golf lineup, VW has done almost everything just right, setting on the right track for Alltrack.