Our infatuation with the Volvo XC90 luxury utility is well documented, having named it our drivers’ choice “best of the year” in 2016. Indeed, it was the most awarded car of last year. So, how does Volvo follow up such a grand slam? Well, with all-new flagship sedan, the S90. Let’s find out if the swedes have now gone 2-for-2.

The 2017 Volvo S90 luxury sedan is the second all-new vehicle to emerge from the reborn Volvo brand.

While their current flagship four-door, the S90 is closer in size to the midsize Mercedes-Benz E-class than full-size S-class; with its 115.8-inch wheelbase about 2-inches shorter than the XC90 crossover that it shares its platform with. Yet overhangs are fairly long, giving it a very substantial appearance.

So, we don’t see the S90 as a direct competitor to the likes of BMW 5-series, Benz E, and Audi A6. It’s not that it’s more luxurious than them, although it is; it’s more just an overwhelming pampered feel that you get behind the wheel here, that you won’t find in middleweight German hardware. 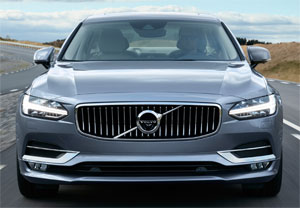 Likewise, its exterior design is beautifully modern without being over-the-top or showy. Many of the XC90’s styling cues are here, including the Thor’s hammer headlights; but it’s clearly more traditional in overall shape.

The Chinese sourced engine is the same 2.0-liter I4 found in the XC90, but there are 3 versions of it. The 250-horsepower turbo is only one found in front-wheel-drive T5s, the 316-horsepower version that is both supercharged and turbocharged for 295 lb-ft. of torque is found in all-wheel-drive T6s, and finally a supercharged turbo and electric-assisted plug-in T8 is scheduled to arrive later.

The 8-speed automatic transmission is from Aisin, with a gentler Asian-luxury feel than the typical Euro-ZF supplied units in many German sedans.

However you boost it, this is one potent 4-banger. After a brief pause waiting for our T6 tester’s power to kick in full, the S90 got off the line with a good push and kept the power flowing steady throughout the ¼-mile. 5.6-seconds for the 0-60; 14.1 for the ¼-mile at 101 miles-per-hour.

The suspension is a reconfigured version of XC90’s; though its air suspension upgrade is available only for the rear axle.

There are driving modes of course, and steering really tightens up when in Sport. It feels heavier than, and not as responsive as, more sport-oriented midsize luxury sedans like the CTS; but once things settle in the corner, you get a ton of grip for getting through the cones faster than we were expecting. 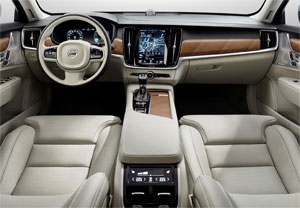 112-feet was our average stopping distance from 60, with nothing but a solid, confidence-inspiring feel accompanying every run.

State of the safety art is included, even semi-autonomous driving. That’s nothing new these days, but the S90 is the first vehicle to have its version, Pilot Assist, as standard equipment.

Pilot Assist can get a bit aggressive with corrections, and works best on slow commutes, and wide open interstates.

It’s clearly not designed for you to take your hands off the wheel and zone out, rather as a safety backup to save you from an impending disaster.

The forward camera does a great job of recognizing road signs and markings, but with no auto lane change feature, we did not feel it is as advanced as Mercedes-Benz’s Drive Pilot or Tesla’s Autopilot.

Where the S90 really sets itself apart from everyone is interior. With Swedish-modern luxury and attention to detail fully on par with the best Benz has to offer.

There’s something for just about every sense to enjoy here; supple leather for your hands and tush to touch, walnut wood for your eyes to admire, 19-speakers delivering Bowers and Wilkins premium sound to your ears; and yes it even smells great in here, and it’s all very “tasteful”.

Is it all enough to attract mass amounts of luxury car buyers? Well, it’s hard to imagine those looking for the typical German sport-luxury car experience being lured by it, but they’ll surely take notice when one pulls up alongside them.

Much like the XC90, pricing seems more than reasonable; starting at $47,945, with even base model quite luxurious. The plug-in T8 won’t arrive for another year.

The 2017 Volvo S90 is a beautiful car. Happily, it stops short of trying to be a sport sedan; but rather, embracing pampering and luxury for the sake of it. On the whole, a very well executed luxury sedan that signals more good things on the horizon for Volvo.