Just 3 years ago, Acura pared down their sedan lineup by replacing both the TL and TSX with the single TLX. Reviews certainly weren’t bad, as its luxurious blend of technology and performance fit right in with flagship RLX. However, most would say it was not as exciting as it could be, and even Acura agreed with that. So let’s see if a revised 2018 TLX is the right answer.

Adding a new dose of excitement to the 2018 Acura TLX starts with an updated look. Front fascia, fenders, and hood are all new; and the Jewel Eye headlights are re-designed. But, best of all, Acura has replaced the awkward “shield-like” grille with the much more attractive “diamond pentagon” first seen on their Precision concept.

All in all, it makes for a more dynamic take on what was already there. 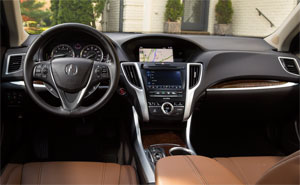 No radical changes to the inside either, other than updated software for the twin-screen infotainment system, which we were happy to see. We’re still not fans of the overall design, but it’s much more responsive than before. Android Auto and Apple CarPlay are now in play, but we found it odd that the apps show up in the upper screen which uses a central controller, not the lower touchscreen.

A carryover 206-horsepower 2.4-liter I4 engine is still standard; with an 8-speed dual-clutch transmission.

Upgrade to the 3.5-liter V6; and in addition to 290-horsepower, 267 lb-ft. of torque, and a revised 9-speed automatic transmission, you can get mechanical Super Handling all-wheel-drive. Those without all-wheel-drive come with Acura’s rear-toe adjusting Precision All-Wheel Steer.

Our early drive time came in the rolling hills around Louisville, Kentucky; the majority spent with the V6. The 9-speed transmission is very smooth, and with both drive systems, ride quality is equally compliant.

Putting the Integrated Dynamics System in Sport+ increases steering feel and throttle response, adds some engine noise, initiates more aggressive programming for the transmission and SH-AWD, and even cuts the HVAC system out temporarily when at full throttle. 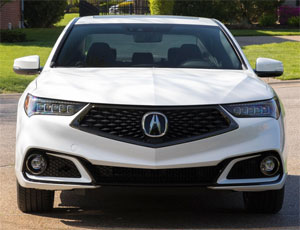 It certainly wakes things up a bit, but not to full-alert status. So, where’s the real excitement coming from?

Well, that’s what the new TLX A-Spec is for. Available with V6 only, the A-Spec gets retuned electric power steering; and when combined with SH-AWD, adds stiffer springs as well as a rear stabilizer bar that keeps things much flatter and confidence inspiring in corners.

SH-AWD worked as great as always, torque vectoring us around corners even in the rain. And while we still don’t think the best handlers in the luxury sport sedan category have anything to worry about, the TLX has certainly moved up the list, and more importantly without losing any of Acura’s luxury feel.

And speaking of feel, we love the thicker steering wheel that comes with the A-Spec. Other interior highlights are more heavily-bolstered seats, red trim for the gauges, and brushed aluminum trim. 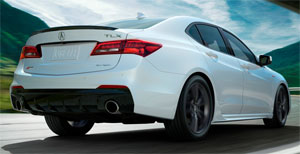 A host of AcuraWatch safety systems are available, but Collision Mitigation Braking is standard on all models.

Some shuffling of prices and more standard features, results in a slight increase in base price, now at $33,950. Stepping up to all-wheel-drive or A-Spec will have you around $40,000, though you no longer have to opt for Technology or Advance packages to get SH-AWD.

They say competition brings out the best in people, and surely that sentiment applies to the automotive world. The 2018 Acura TLX is certainly the best it’s ever been, but also still unique in that it’s not trying to be a BMW; rather a whole lot more exciting TLX. And that’s good news to Acura fans, and us!