Much like basic sedans have spawned ever sportier  4-doors over the years, the world of SUVs that we now live in, continues to expand with variations on the theme. Like the Audi SQ5. One ute where performance is as important as practicality.

Regular viewers of MotorWeek know that we’re big fans of what Audi has been doing lately, even claiming the most recent Q7 as a new benchmark for the luxury 3-row crossover segment. Well, 2018 sees the launch of a 2nd generation of the middle-weight Q5, and it’s the high-performance SQ5 variant that we have here.

Another item getting attention in the rework in interior space, mostly for rear seat passengers, who gain more leg and shoulder room. 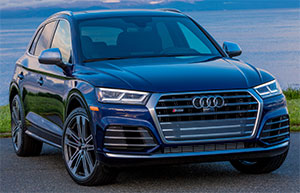 Sometimes, more room for people means less room for cargo, and that is the case here; at least behind the rear seats where cubic-footage is reduced from 29.1 to 26.8. Still, with that additional space of the 2nd row, max cargo climbs from 57.3 to 60.4.

But while that 2.0-liter comes with a 7-speed DCT, here you’ll get a traditional automatic with 8-gears.

The suspension grabs the usual stiffening and straightening; but more importantly, an adaptive air suspension can be added for first time, as part of the S Sport Package. 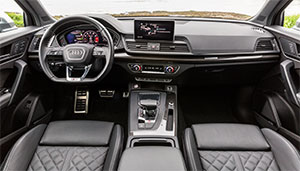 Spend any time at all behind the wheel of the SQ5, and you quickly get why luxury crossovers are taking over the world. It truly does feel like you’re driving an A4 sedan, yet you have all of that additional room for people and their stuff. Along for the ride are coddling seats, a quiet cabin, and of course, a ton of street potential; as well as a great exhaust note that’s never too loud.

Push a little harder on the track though, and it’s indeed A4 you’re reminded of, not S4, unfortunately. It’s certainly not the most “connected” feeling we’ve ever had with a sporty SUV either, but utterly proficient, with only mild understeer.  Firm, stable, and comfortable regardless of speed.

The SQ5 bolts off the line like a sprinter out of the blocks, standard quattro all-wheel-drive delivering plenty of grip. We hit 60 in just 5.3-seconds.

No turbo-lag or noticeable hits of power, though the trans will give you quite a jolt at full throttle shifts; at least in Sport mode, left in Normal mode, it wants to find high gear and stay there for fuel economy’s sake. Full throttle for the full ¼ resulted in a time of 13.8-seconds at 102 miles-per-hour. 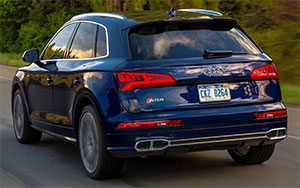 You’d think that air suspension might give it a floatier ride on the street, but the opposite is true. It feels nailed down and flat in corners, actually a bit harsher than some; but with a solid nature that never gives you the impression you have to tiptoe at all, no matter the road conditions.

Government Fuel Economy Ratings are 19-City, 24-Highway, and 21-Combined. So our 22.4 miles-per-gallon average on Premium was not bad at all. The Energy Impact Score is about average at 15.7-barrels of annual oil consumption with C02 emissions of 7.2-tons.

The 2018 Audi SQ5 arrived just after a refreshed Mercedes-Benz GLC and just before the all-new BMW X3. It’s more luxurious than the former; and more athletic than the latter. It seems to be the sum of all that has been great about recent Audi’s, engineered into one impressive SUV. No wonder Audi is quickly becoming our go-to German brand, and this SQ5 is certainly worth your consideration too.