BMW seems to on a mission to be all things to all people…or at all least to all luxury car buyers. So, in addition to being early adopters to the luxury SUV game, they’re now trying to fill every niche possible, including ones that only they seem to be competing in. Well, maybe that explains the 6 Series Gran Turismo; let’s see if there is a method to their marketing madness.

It’s hard to classify the 2018 BMW 640i xDrive Gran Turismo. It’s certainly not your typical sedan or hatchback; and don’t confuse it with the 6 Series Gran Coupe either. But, if you remember the 5 Series GT from 2010, think of this 640 GT as its replacement; or perhaps the closest thing to a 5-series wagon that we’re likely to get here in the states.

And like its predecessor, there’s an enormous amount of space inside, thanks to a 120.9-inch wheelbase that’s almost 4-inches longer than a 5 Series sedan.

It’s still a far cry from beautiful, but the design appears much more cohesive than before. The rear remains tall; but in profile, it now looks more like a traditional 5-door hatchback, and less like a truncated wagon. 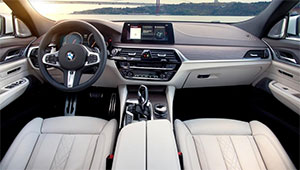 The aggressive nose, and lots of taut body lines, are all BMW hallmarks, and BMW continues to have some of the coolest headlights out there. Standard wheels are 19s.

You’ll enjoy all of the roominess no matter which seat you find yourself in.

Those up front will also experience the typical BMW sporty cockpit feel; while those in back, will get full-size sedan amounts of legroom and headroom. 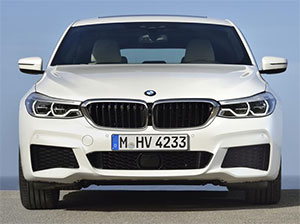 Under the power-operated rear hatch is a very wide opening, and 31.0 cubic-ft. of nicely finished space. Folding the seatbacks, ups it to 65.0 cubic-ft. Even though the swoopy roof will cut into cargo height, capacity is directly in between BMW’s X3 and X5 Sports Activity Vehicles, and more than the bulbous looking X6.

Much like the 5 Series, it has the perfect balance of luxury and sportiness. Want to relax and cruise on the highway? It does that with true tranquility and silkiness. Want to whip it around your favorite back road? No problems there either; it stays very flat and responds immediately to every input.

Though our car was aided by the available Dynamic Handling Package, which adds Active Roll Stabilization and Integral Active Steering to the Dynamic Damper Control air suspension. It all works together to make the Gran Turismo’s 4,400-lbs. all but disappear through high speed sweepers.

The experience however was slightly different through our tight cone course. Here, the steering feels over-boosted, and we wished for more feedback from all parts of the car. Yet, grip remained fantastic throughout.

There was traction a-plenty for launching as well; and a launch mode that worked flawlessly, getting us to 60 in just 4.8-seconds.

Power pours on strong, and never lets up; despite a bit of a see-saw weight-transfer effect when the 8-speed automatic transmission triggers a shift. And a healthy bellow from the exhaust accompanied us for the entire 13.3-second trip through the ¼-mile, at which time we were travelling at 105 miles-per-hour.

Making all of this happen, is BMW’s 3.0-liter inline-6 turbo engine; rated at 335-horsepower and 332 lb-ft. of torque. All-wheel-drive is standard.

There’s plenty of whoa to go along with the go. 99-feet was our average stopping distance from 60. We did experience some fade as the runs added up, but there is an awful lot of weight to bring to a stop that quickly.

Government Fuel Economy Ratings are 20-City, 28-Highway, and 23-Combined. Our average on Premium was just about right on, at 23.2 miles-per-gallon. Making for an average Energy Impact Score, with yearly use of 14.3-barrels of oil, and C02 emissions of 6.4-tons.

Things are as simple as it gets when it comes to pricing; just one version of the Gran Turismo, starting at $71,195, to which you can add a host of options, either in package form or a la carte.

Well, if you were looking for a very luxurious ride with plenty of comfort and performance, there were already plenty of BMWs to choose from. Now you can add one more to the list, the 2018 BMW 640i xDrive Gran Turismo. It is the best of BMW sedans, SUVs, and hatchbacks, all rolled into one. We agree that the brand may indeed be slicing the marketing onion super thin, but if that means competing in a class of one, no one does it better than BMW