It says wonders about where BMW’s priorities are right now, that the latest 5-series won our most recent drivers’ choice award for best luxury car. But not so fast. BMW may indeed be placing a higher priority on luxury these days, but they haven’t forgotten what got them this far in the first place. It’s time for the new M5.

Turning their most luxurious 5 Series sedan ever, into the 2018 BMW M5 was perhaps harder than usual; but those Bavarians are never ones to shy away from hard work, or in BMW’s case, mixing a little bit of controversy into everything they do.

Much has already been made about this 6th generation M5’s all-wheel-drive format; but the standard M xDrive system is highly rear-biased, and if 4-wheel traction is that offensive to you, you can always dial in a 2-wheel-drive mode whenever you want. 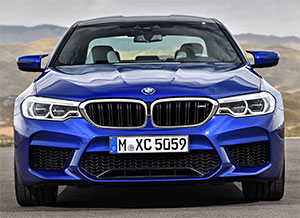 Over the years, just about every engine configuration has been used in the M5; but currently a twin-turbocharged V8 remains the weapon of choice.

The 4.4-liter pushes out 600–horsepower through one of the loudest exhaust systems we’ve heard on a stock BMW. Bigger turbos, dialing up almost 25psi of boost, are just one of the many updates that have increased output to 553 lb-ft. of torque.

Even with all-wheel-drive, weight is down from last generation, by the usual means… more aluminum, and carbon fiber; but we’re still talking about well over 2-tons here, at 4,370-lbs.

With all of that in mind, what we’re here to determine is, does the F90, as it will forever be known by bimmerphiles, follow the BMW trend of becoming less of a driver’s car? And by here, we mean Dominion Raceway near Fredericksburg, Virginia; where the summer temps were hot, but the M5 stayed cool, calm, and collected.

But no one can deny the insane amounts of power that this car puts down out of the corners, or the efficiency by which it does it. The 8-speed automatic is a true automatic, not a dual-clutch unit; but it’s close enough to not hold you back on the track too much, and better than just about any manual that purists are surely crying for right now. 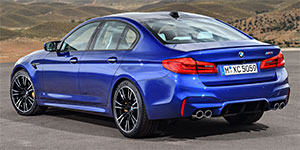 Getting in the corners, the M5 is very responsive, seemingly shedding weight the faster you go. Braking is just as good as you’d expect with the optional M ceramic rotors, and they even shave another 50-lbs. of weight.

It’s not a complete return to form, but BMW is certainly heading in the right direction; with this M5 way more of a driver’s car than the last generation.

Heading in a straight line, you’ll see 60 miles-per-hour in just 3.2-seconds. That’s almost a full second quicker than the last M5. Here, the all-wheel-drive is surely worth its weight in golden levels of traction. Launch control is available, after you figure out the secret handshake to enable it; but after a few runs, it seems to dial back the fun a bit, just to make sure everything holds together.

Doesn’t really matter, 11.4-second ¼-miles at 127 miles-per-hour are as easy as just punching the gas, releasing the brake and holding on. 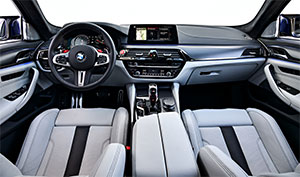 The usual aero add-ons, as well as the carbon-fiber roof, go a long way in transforming the sedate executive sedan look of the 5 Series, into this aggressively styled performance machine.

Inside, just about every surface gets updated or enhanced; most sporting an M logo. But, none of the changes subtract from the very luxurious cabin.

Government Fuel Economy Ratings are 15-City, 21-Highway, and 17-Combined, with our average an appropriate 16.9 miles-per-gallon of Premium fuel.

The M5 starting price is $104,595, with no shortage of options to tack on from there. We wouldn’t call it the highly desirable must-have automotive accessory of the year, but the 2018 BMW M5 is a cool piece, and a high-tech luxury projectile of mass track destruction.