We tested the original BMW X3 sports activity vehicle back in 2003. We marveled at how the brand’s second utility managed to add boat-loads of everyday comfort and versatility while maintaining so much of its namesake 3-series sport sedan’s concise driving character. Now, as the 3rd generation X3 has arrived, it’s time to take stock of BMW’s compact ute once again, and see just how it’s evolved.

BMW jumped into the premium utility market before most. They were a true early adopter in embracing the new “utilitarian” norm for luxury carmakers. But, the 2018 X3 drives into a much more crowded automotive landscape than the original did, with rival luxury utes at every turn. Still, BMW didn’t want to mess too much with success.

So, they kept the new X3’s exterior dimensions almost the same as the outgoing model. Yet, they stretched the wheelbase by over two inches for additional interior space.

That’s because its lesser sibling the X1, which has the advantage of being front-wheel-drive based, had almost the same amount of room inside as the out-going rear-drive based X3.

But behind the wheel, there’s no comparison. While the X1 is indeed very fun to drive, it’s more like a lightweight, nimble plaything, whereas the X3 feels solid and nailed down; yes still very much like a 3-Series sedan.

And, since BMW does place such a high priority on that driving experience, it’s notable that an M Performance model is newly available in the X3.

The M40i, which replaces the xDrive35i, features BMW’s 3.0-liter turbo inline-6, outputting 355-horsepower and 369 lb.-ft. of torque, an 8-speed automatic transmission, and more rear-bias for the standard xDrive all-wheel-drive system.

It does indeed feel powerful, but like any performance machine, things can be loud and a bit abrasive at times.

M40i’s get sportier-looking trim inside too, as well as an aero kit for the exterior; where you’ll also notice black chrome tips for the performance exhaust system, M Sport brakes, and 19, 20, or 21-inch wheels. 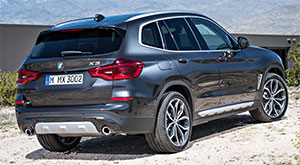 But, we also spent time in the much higher volume xDrive30i, which replaces the xDrive28i base model. Under its hood, is a slightly updated 2.0-liter I4 turbo; now with 248–horsepower, 8-more than before, and 258 lb.-ft. of torque.

It ramped us to 60 in 6.5-seconds. Really good for any “base model” utility. The M40i does the same deed about two seconds quicker.

All-wheel-drive grip, and easy to use launch control, get you off the line efficiently; while the 8-speed automatic that comes with all X3s, snaps off shifts with an almost brutal immediacy, that keeps the turbo-4 in its sweet spot for the whole ¼-mile trip, which takes 15.0-seconds at 90 miles-per-hour. It may not be the absolute fastest SUV out there, but it feels like it.

Weight is also virtually the same as last year, but it has been shifted around, with a little more now supported by the rear wheels for improved handling.

Even more so here in the 30i where turn-ins are deadly quick, and body roll comfortably minimal. You do have to keep inputs smooth however, as stability control is quick to trigger.

Two thumbs up for braking, as stops from 60 averaged just 102-feet. A firm pedal with short travel leads to a comfortable and reassuring feeling. All-in-all a very well-balanced package.

With X1 now taking up entry-level SAV duties, even the base X3 gets much nicer materials throughout the cabin, part of a pleasant overall evolution to the familiar layout inside. The dash-top touchscreen now stretches over 10-inches, and the available Head Up Display is 75% larger than before.

Very minor changes to cargo capacity, with rear space up slightly to 28.7 cubic-ft., while overall volume with rear seats folded, falls just a tad to 62.7 cubic-ft.

This X3 is also the first BMW utility to offer a factory-installed trailer hitch. Towing capacity is good for a compact, at 4,400-lbs.

Government Fuel Economy Ratings for the 30i are 22-City, 29-Highway, and 25-Combined; our average was a disappointing 23.3 miles-per-gallon of Premium. Still, there’s an average Energy Impact Score of 13.2-barrels of yearly oil use, with C02 emissions of 5.9-tons.

Keeping performance high on the priority list, while bringing more utility and luxury along for the thrill ride, will surely keep the 2018 BMW X3 a popular choice, we also think the X3 has evolved enough for many of them to continue to look on with envy.