The Buick Regal has been a mid-size sedan and coupe flag bearer for the brand since the early 70s. But, those traditional body styles have fallen out of favor. So, Buick is redefining their brand for a new generation of buyers by trying something totally different with a new generation of Regal. Say goodbye to the two and four-doors, and hello to the 5-door regal Sportback and TourX.

In a fairly short amount of time, General Motors has transformed Buick into truly a brand apart from the rest of their fold. It started with the subcompact Enclave crossover and continued through the Chinese-built Envision midsize crossover. And now they’re doing the most European of all things, unleashing an all-new 2018 Regal 5-door hatchback…the Sportback…along with a TourX station wagon.

The Buick Regal Sportback looks right at home among other sleek European hatchbacks like the Audi A7. It’s coupish roofline almost completely hides the fact it wears a rear liftback rather than a traditional trunk lid. 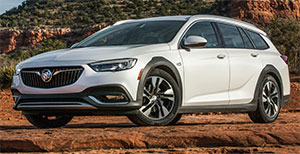 The Regal Tour-X, on the other hand, is clearly a station wagon, albeit one with plenty of smooth European flavor. But, it is big, so its one built more for the American landscape than Old-World cities.

The Tourx is actually 6.7-inches longer than a Subaru Outback, its most logical competitor, on a 111.4-inch wheelbase. Though Buick’s attainable luxury theme certainly brings Volvo and other European brands into the equation as well. And with new wagons coming from Jaguar and others, might we be seeing a wagon renaissance?

Good call on GM’s part to make it a pseudo-SUV; by putting X in the name, giving it a luxo-rugged styling theme opposed to the wedge forms so common today, and equipping it with all-wheel-drive as standard equipment.

AWD is also available on the Sportback, although front-drive is standard. Both chassis mates share the same engine, a 250-horsepower 2.0-liter turbo I4. All-wheel-drive cars get an 8-speed automatic transmission that allows for 295 lb.-ft. of torque. Front-driver’s get an additional gear with a 9-speed, but less torque; 260 lb.-ft.

Our track time came from behind the wheel of a front-drive Regal Sportback. No lag off the line, as the 2.0-liter seems eager to deliver all of its torque right away. We hit 60 in a fine 6.4-seconds.

Steering is easy and fairly linear, enabling nice quick turn-ins; while the chassis provides seriously good grip. Weight transfer is noticeable, but not upsetting. It’s not quite sport sedan territory, but pretty darn close for this sedate brand.

Brakes are Euro-strong without being grabby; with a short 104-foot average stopping distance from 60. 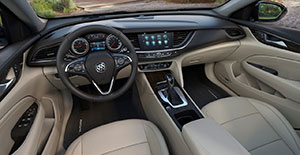 Ride quality has a hint of European solidity to it, but not enough to stray too far from what we’re accustomed to in a Buick; and it certainly remains as quiet inside as all other current models from the brand.

Both cars offer a wealth of space inside, for all 5-occupants. Front seats a very comfortable; once you nestle in that is, as even the bottom cushions have significant bolstering.

Manual dash controls are minimal, but well placed; and the infotainment screen is very well integrated.

Things get particularly roomy in the Tourx’s deep, wide cargo area with cargo rails. 32.7 cubic-ft. seats up, expanding to 73.5 seats down. For comparison, that’s just shy of a Honda CR-V. 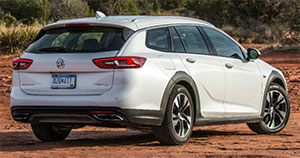 The Sportback has only a little less, with 31.5 cubic-ft. of space beneath its easy-opening hatch. Folding seatbacks are either 60/40 or 40/20/40 depending on trim; folded, they expand the space to 60.7 cubic-ft.

Pricing for Regal Sportback starts at $25,915; getting all-wheel-drive requires stepping up to Preferred II trim totaling $32,695. With AWD standard, the TourX starts at $29,995.

There’s nothing traditional Buick about the 2018 Regal Sportback and TourX. And, there is a lot to like about both of these Opel-based rides. The Sportback offers near-luxury sedan comfort with added 5-door practicality. While the TourX delivers SUV versatility and capability, in an easy to drive well-appointed package. It’s a unique approach for an American brand, but one we’ve all of a sudden come to expect from the new Buick.