You may not see too many Cadillac CT6’s on your daily commute, and that’s okay with Cadillac; as their flagship sedan is intended as an aspirational showcase of the brand’s design and technology. And there are some new options for the CT6, both heavy on the technology side. So it’s time to check them out with some hands on and hands off driving.

The Cadillac CT6 arrived just two years ago; and we knew then, that this 2018 Chinese-assembled plug-in hybrid was also a part of the plan.

Its 18.4-kWh battery pack is fairly sizable for the plug-in hybrid breed, getting you over 30-miles of EV range; plenty for most people to get to work in the morning.

Rear-wheel-drive only, the Electric Variable Transmission system features two electric motors very efficiently packaged inside of the transmission, along with three gear sets. It’s paired with a 2.0-liter turbo I4, making a total output of 335-horsepower and 432 lb.-ft. of torque. 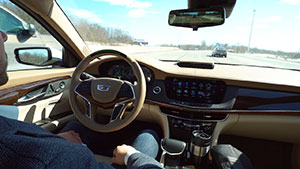 As for fuel economy performance, the Government’s Combined Rating is 62-MPGe. With a full charge, we drove this PHEV on a long weekend unplugged, and still achieved 31.0 miles-per-gallon on Premium; compared to the 22.3 miles-per-gallon we saw for that twin-turbo V6.

And it makes for a very good Energy Impact Score of just 5.6-barrels of yearly petroleum use, along with 2.4-tons of CO2 emissions.

Now, “plugging in” is not all that’s new on the CT6 technology front. Those of you wanting to “drop out” may be interested in Cadillac’s new Super Cruise semi-autonomous driving system.

Cadillac calls super cruise “the world’s first true hands-off driving system for freeways.” That’s because it will only work on Interstate-style, controlled access highways that are already mapped into the system.

“To engage Super Cruise, you first set the Adaptive Cruise Control, and if conditions are right, like you’re centered in your lane and its dry weather, you’ll get a white symbol on the dash. Hit the Super Cruise button. That symbol, along with the top of the steering wheel will turn green. Sometimes it took a couple of tries to get it to engage. But once all that happens you can take your hands off the steering wheel and put them in your lap.“

The system does the steering completely without you. No warning lights or buzzer to tell you to put your hand on the wheel or else. There is some slight pin-ponging like all other semi-autonomous systems we’ve tried, but not much. On the other hand, it will not change lanes or automatically move over for construction like some rival systems claim.

“On a curve, you do feel like you are hugging the right side of the lane, and that can be a little alarming when someone passes you on that side. But, overall I found Super Cruise handled curved interstates in traffic very well, and did allow me to relax, if just a little, but far more than semi-autonomous systems where your hands have to constantly be touching the wheel.”

Just like regular cruise control allows you to relax your right foot for a bit, Super Cruise does the same for your hands. But, look away from the road too much, or down at your phone, and a camera alerts the system, which first prompts you with lights and vibrations, and then if you ignore it, shuts down.

“This is the first semi-autonomous system that I’ve driven that didn’t disappoint because it does not over promise, and you really can drive hands free for long distances. I drove it 70 miles an hour on open interstate for over a half an hour and did it with minimal fear. Indeed, Super Cruise is exactly what Cadillac says it is, a superior cruise control system.”

Super Cruise is part of a $5,000 package added to Premium trim, or standard with top Platinum, which starts at $85,290. There is only one trim choice when buying the Plug-In. It is very well-equipped at $76,090.

It’s hard not to be impressed with the technology that GM has packed into the 2018 Cadillac CT6. As with the Chevrolet Volt and Bolt EV, the CT6 PHEV is ahead of the curve in affordability for EV-based luxury. And, now, by plunging into the autonomous driving pool with Super Cruise, they’re making quite a splash there as well.  All making the CT6 a worthy technology showcase of what GM and America are capable of.