General Motors pretty much kicked off the large 3-row crossover movement with their 2007 Saturn Outlook. but, it didn’t take long for rivals to one-up the general with slightly smaller and nimbler competition. Since 2009, the Chevrolet Traverse has been the lambda platform’s volume leader. and, while clearly a sales success, it really hasn’t changed much over the years. until now that is. For 2018, what’s old is new again.

Indeed, GM has plenty of experience building 3-row utilities; both in the old school SUV fashion, as well as in today’s more popular crossover style. This 2018 Chevrolet Traverse shares the new global C1XX…or “Chi” platform…with the GMC Acadia and Buick Enclave as before, but thankfully GM continues to increase separation between brands.

On that note, the Traverse is on the long wheelbase version, same as Enclave, while Acadia is on the standard “Chi”.

At 204.3-inches, that gives Traverse about a foot more overall length than its GMC kin. Also, Traverse is the only one of the trio setup for 8-passenger seating. 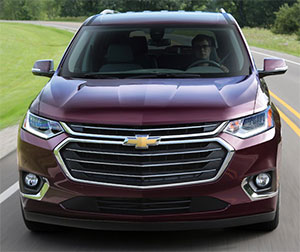 Styling is always personal, but sleeker is a word we’ll use. While it’s slightly longer, the new Traverse looks leaner and less bloated, especially on profile, which we think favors the rival Ford Explorer.

Base engine is still a 3.6-liter V6. Now with automatic stop/start, it also adds a tiny bit more displacement thanks to a larger cylinder bore, and ekes out a few more horsepower, at 310. Torque stays the same at 266 lb-ft.

Believe it or not, a 2.0-liter turbo-4 is the engine upgrade. It features less horsepower, at 255, but more torque at 295 lb-ft. Currently available only in sporty RS trim, and only in front-wheel-drive. All other trims except for the base L, can be equipped with all-wheel-drive; while top level High Country models get a more advanced twin-clutch traction system.

Our time with a front-wheel-drive 3.6-liter, revealed that it remains totally adequate for performing family hauling and commuting duties, but never feels overly powerful. Max. towing is actually down 200-lbs. from last year to an even 5,000.

The 9-speed certainly helps fuel economy, as the Government Ratings are up across the board; now at 18-City, 27-Highway, and 21-Combined.  We averaged a good 22.9 miles-per-gallon of Regular. 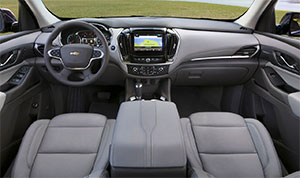 Better news than all of that, is that the new Traverse fully feels nimbler behind the wheel; on the street at least, which is certainly where the Traverse behaves best.  But with that, comes a sense that it’s not quite as solid feeling as some in the segment.

And, on our handling course, we still fought plenty of understeer; steering feel has noticeably improved, but we’d still consider it slow to respond to inputs.

Grunty low-end torque makes for an efficient leap off the line. The quick-revving 6 delivers power stoically throughout the range. We hit 60 more than a second quicker than in our last Traverse test at 6.9-seconds; with the full ¼-mile taking 15.3-seconds at 93 miles-per-hour.

With fade-free, consistent stops from 60 of just 118-feet; we give it very high marks for braking too. 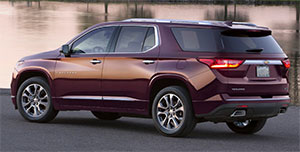 Don’t know if it’s an early software issue or not; but away from the track, the new 9-speed transmission seemed a little clumsy at times; something we didn’t notice with the more refined driving experience of the new Buick Enclave.

“Large and in charge” is the theme inside, with more than adequate room in all seating positions, including the 3rd row…and cargo capacity that’s among class best at 23.0 cubic-ft. behind the 3rd row, 58.1 behind the 2nd, and 98.2 with all seats folded.

Our tester was sensibly equipped in LT trim, which some found a little disappointing. But, High-dollar High Country and RS trims are available if maxing out the bling factor is important to you.

Traverse pricing is on par with the segment, starting at a reasonable $30,925 and escalating to the very cushy High Country at $53,095.

It’s no secret that GM’s big 3-row crossovers were long overdue for a complete update. And there’s no argument that the 2018 Chevrolet Traverse is now fully improved and modernized. However, we do wonder if GM went far enough. Just being bigger and a bit better doesn’t really cut it in a class where options are many. Still, we do think Chevrolet did enough to be solidly competitive, and the new Traverse will certainly be plenty appealing to all those that prefer their family ride have a domestic name.