You may have never caught yourself thinking, “wouldn’t a plug-in minivan be cool?” Yet, it only seems logical that the brand that created the front-wheel drive minivan, would also be the first to produce a plug-in hybrid version. That would be the Chrysler Pacifica hybrid. Now, we know it’s a greener Pacifica, but does it take the ultra-family friendly minivan concept to the next level?

The 2018 Chrysler Pacifica Hybrid is a plug-in hybrid, although, it’s not specifically labeled as a PHEV since there’s currently no non-plug-in hybrid model.

Added to a revised version of the standard Pacifica’s 3.6-liter V6, is a dual-motor eFlite electrical variable transmission. Total output is 260-horsepower; far from astronomical, but some additional EV grunt down low, makes up for any shortcomings. 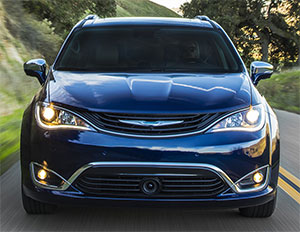 16kWh of battery storage, enables a quite good 33-miles of EV-range before the Pacifica begins operating as a conventional hybrid. Although, you have no control over when that EV power is used. Also, due to that battery’s location, you will have to sacrifice one of the Pacifica’s best features, the 2nd row Stow ‘n Go seating. And, we really missed it!

Otherwise, every other family friendly feature you buy a minivan for is still here, including loads of practical and easy to access storage for people or cargo. That means a maximum of 140.5 cubic-ft.; 87.5, behind the 2nd row, and 32.3 behind the 3rd.

Starting midway up the trim tree means the Hybrid gets the larger 8.4-inch Uconnect touchscreen. It remains one of the most user friendly systems out there, and adds some unique screens for monitoring this hybrid’s powertrain. 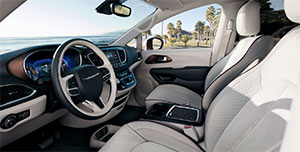 On the road, the Pacifica Hybrid remains very carlike to drive; and is also exceptionally quiet and serene. You can sense the additional battery weight, but with it placed down low, there’s virtually no top heaviness. We actually found the 33-mile EV-range estimate fairly conservative, as driven kindly, you can easily do much more. Charge time is as little as 2-hours, with 240-volts; and you can monitor progress with an app of course.

According to Chrysler, the Pacifica Hybrid has a sculpted exterior with athletic proportions. OK, but it’s still your basic 2-box minivan, although a quite handsomely styled one. Unique hybrid features include a different grille, special wheels, unique badging, and some exclusive exterior colors.

Inside, there’s new “Anodized Ice Cave” accents, as well as Ice Blue stitching; because we all know that Ice anything screams hybrid. 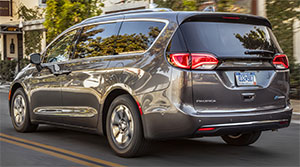 Government Fuel Economy Ratings are 32-Combined for the MPG, 84-Combined for the MPGe. Our loop came in just under the Combined at 31.0 miles-per-gallon of Regular. Still, that’s a solid 30% better than we managed with a long term Pacifica. The Pacifica Hybrid also has an excellent Energy Impact Score, with consumption of 4.0-barrels of oil annually, and CO2 emission of 1.8-tons.

This hybrid starts at Touring Plus trim; so at $41,090 it will cost you $7,400 above a comparably equipped non-hybrid. But, the best news of all, being a plug-in opens up government rebates of at least $7,500; making it pretty much a wash.

Was anyone really asking for a plug-in minivan? Don’t know. Bottom line, plugging in whenever you can, is still more efficient than topping off the tank, so money saved. Plus, the 2018 Chrysler Pacifica Hybrid still has most of its family and hauling features intact, along with new efficiency few crossover utilities can approach. So, the makers of the original front-drive minivan have indeed ushered in the next level of the same…all aboard!