Usually when we talk about MINI Coopers, you hear things like fun, cute, and suprisingly roomy; but there’s a new MINI that’s a little different. Pay attention and you might hear things like killowatt-hours, EV range, and charge times. It’s the new MINI E Countryman. So let’s take a spin in this electrifying new MINI.

This 2018 Mini Cooper S E Countryman ALL4 is not the first time we’ve plugged into a Mini of course, having spent time with the 3-door Mini E back in 2010. That full-EV had limited lease-only availability and was only around for a few years.

The 5-door Countryman crossover utility is a much bigger Mini of course, and Mini has much bigger plans for their Plug-In hybrid version of it.

Despite having Cooper S in the name, there’s no 2.0-liter beneath this bullnose bonnet; rather, the base Cooper’s 1.5-liter 3-cylinder turbo. 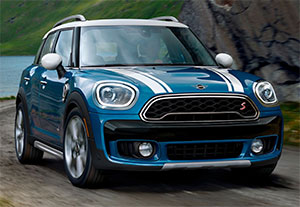 The trick here, is that the electric motor and a 7.6-kWh battery pack are mounted in the back, and provide power to the rear wheels only; think of it as a BMW i8 in reverse.

A 6-speed Steptronic automatic transmission is standard; modified to deal with the unique powertrain setup.

Still, you’ll get just 12-miles of pure EV-only driving. And, since its hardware takes up some fuel tank space, overall range is only around 270-miles.

Charging takes just over 3-hours with 240-volts, while drive modes allow for full-gas or full-EV driving, as well as blending of the two.

The Government’s Combined Fuel Economy Rating is 65-MPGe; but with only 12-miles of battery, our average came to 32.2 miles-per-gallon on Premium; that’s only about a 15% increase over our average with a regular Cooper S Countryman. Still, it gets a very good Energy Impact Score, burning 8.2-barrels of oil yearly while emitting 3.7-tons of CO2.

Eco-minded or not, you expect a certain driving experience in all Minis. And while the brands inherent sense of balance remains, there is much more weight transfer happening through the cones; amplified by very quick, almost effortless steering.

It was hard to tell how much, if any, help the rear wheels were with power delivery; but this plug-in just doesn’t seem to want to hug the cones like we’re used to in a Mini.

The added electrical punch off the line may not have been as aggressive as we were hoping either; but there’s decent grunt at takeoff, and we got to 60 in 6.8-seconds, 3/10ths quicker than we did in the Cooper S Countryman.  The ¼-mile was completed in 15.4-seconds at 86 miles-per-hour. 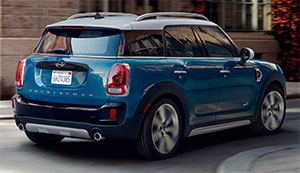 As for the utility side of the E Countryman, due to packaging all of the additional hardware, mostly under the rear seats, cargo space only falls a tiny bit, from 17.6 to 17.2 cubic-ft.

With this generation of Countryman, the interior has gotten much nicer. To that, the plug-in adds some unique displays and yellow trim; with the 6.5-inch Mini Connected infotainment system standard.  The 8.8-inch system with navigation is optional.

The yellow trim finds its way outside as well; the only other difference being the fender-mounted charge port.

At $37,650, the E Countryman is about 8-grand more than a base all-wheel-drive version. So, in this country at least, unless you plan on plugging in a lot, it’s probably not worth the extra money. Off course, it will be more attractive globally, and even here, there are still some tax credits to consider.

With crossover sales being what they are these days, it is a bit surprising that there are relatively few plug-in hybrid SUVs out there. So we’re glad to see this effort from Mini. Even if the 2018 Cooper S E Countryman ALL4 doesn’t usher in a whole new era of fuel-stingy utilities, it’s a small step in the right direction, towards a future where we’ll fill-up not at a pump, but on the grid.