We’ve all heard the numbers and seen the hype videos. The Dodge Challenger SRT Demon, with its 840-horsepower Hellcat engine will do the ¼ in 9.65-seconds, while hitting 60 in just 2.3. But as with most cars, there’s more here than just numbers. So come along to the dark side with us, as we do some down and dirty deeds with the demon.

The 2018 Dodge Challenger SRT Demon is one of those cars that you think is only possible in a dream. Fortunately, the hard-working folks at Dodge’s Street and Racing Technology division are more than just dreamers. They actually made this drag strip worthy beast happen.

It seems implausible with all of the hype surrounding it, but the Demon was actually developed mostly in secret; engineers going cloak and dagger, and even working on their own time, until they knew they had something the brass would devour.

We all know the basics for more horsepower, more air, and more fuel to react with it; but cranking the Hellcat’s 6.2-liter HEMI V8 up to 840-horsepower and 770 lb-ft. of torque required a lot of work, a few more revs, and 100-octane fuel. On premium grade gas it’s a mere 808 horse ride.

Such output also demanded cranking the supercharger up to 14.5 psi to shove said air into the combustion chambers. 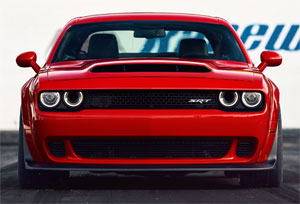 Along the way it passes through an SRT-developed Power Chiller which uses the A/C’s refrigerant to reduce air temps by up to 18-degrees.

On the other end of the engine, they beefed up everything that carries the power to the rear wheels, added a production-car first TransBrake for nailing killer launches, and a line lock for simplifying burnouts.

Now, with all of that in mind, what you might not expect, is at the dragstrip, the Demon is not that insane at all. And by that we mean doing ten second ¼-miles in a car properly set up for drag racing, is similar to hitting a road course in a perfectly balanced race car.

The Demon launches extremely hard, but if you hit it just right, all of the car’s weight gets pushed to the rear, and it just hooks up and takes off; carrying all of that power down the track with no drama whatsoever.

Sure, you can get some wheel-spin if you want, but using Drag Mode with Launch Assist and Torque Reserve makes launching super simple.

All Demons come equipped with the TorqueFlite 8HP90 8-speed automatic transmission, which fired through gears without missing a beat; as we made passes continuously for an entire afternoon, without a hiccup. 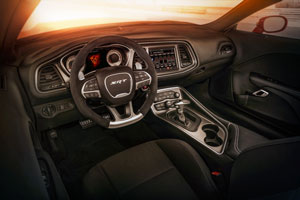 So, don’t think of this as some one-off car just to do a couple runs and get some crazy numbers for publicity.

With temps in the 90s and high humidity, we couldn’t match Dodge’s NHRA-certified run of 9.65 but we ran consistent low-10s, and came real close to matching the claimed 2.3-seconds to 60.

Other things that set the Demon apart from standard Hellcat fare, are the Air Grabber hood and wide-body styling that adds fender flares to fully cover the standard 315/40/18 Nitto drag radials. Wheels for those front skinnies are part of the $1 Demon Crate option.

Unique touches inside, include a numbered Demon badge, and Demon logo on the seats. A Speedlogix 4-point harness is also an option…

…as is the front passenger seat, though Dodge will throw it back in for just a buck more.

Even though every update has been made with drag racing in mind, it remains a very street-able car. And as a value-added bonus, due to the flexible sidewalls of the drag radials, ride quality is actually better than the Hellcat.

Now, you would think that’d be enough SRT news for one year, but Dodge has got something else headed our way for ’18, it’s the Durango SRT.

Believe it or not, it’s the first time Dodge has applied the SRT treatment to this 3-row SUV.

For power, it gets the 392 HEMI V8, which supplies 475-horsepower and 470 lb-ft. of torque. The all-wheel-drive system, 8-speed automatic transmission, suspension, and 7-mode drive system all get upgraded to handle it.

This Durango will hit 60 in 4.4-seconds, and clear the ¼-mile in less than 13. But even more impressive, is that you lose none of the functionality that you buy an SUV for; as this Durango will tow 8,700-lbs.

There’s a body kit of course, and plenty of interior treatments as well.

But, back to the Demon. For a turnkey 9-second drag car, base pricing of $86,090 doesn’t seem that evil. That’s less than what some of the original Hellcat’s were going for. 3,000 of them will be available here in the U.S.

The 2018 Dodge Challenger SRT Demon may be a hellishly fast car, but we say God Bless the U.S.A.; as the forces of good and evil have combined to create one of the most amazing cars to ever lay down rubber on America’s streets.