While we can all dream of owning a Dodge Challenger SRT Demon or maybe even a Jeep Cherokee Trackhawk, most of us need something a little more practical for the everyday grind. But if we’ve learned one thing from the Dodge boys, practical doesn’t have to mean boring. Let’s see what they’ve now done to the venerable Dodge Durango!

You don’t have to take your 2018 Dodge Durango SRT to a race track, but knowing that you could, and it wouldn’t disappoint, is reason enough for many. Owning one of the baddest SUVs ever created, is another good reason.

No, this doesn’t have the full-on Hellcat HEMI of its Jeep Grand Cherokee Trackhawk relative, but it does have SRT’s 6.4-liter naturally-aspirated version, here with 475-horsepower and 470 lb-ft. of torque. And while on paper, that looks far shy of the supercharged Trackhawk’s 707-horsepower insanity, once you nail the Durango’s throttle, you probably won’t notice much of a difference between stop lights, as it feels every bit as fast. 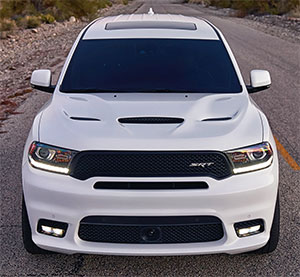 A healthy seven drive modes, allow you to tailor the experience to whatever you have in mind that day. For us it was, Track mode; which sets the suspension to its stiffest setting, dials back the traction control, and quickens steering, as well as increases shift speed in the 8-speed automatic.

The lowered suspension doesn’t help the Durango feel any lighter; however, it does help it feel extremely well-planted, and Dodge was wise enough to not eliminate all of the traction control nannies for it can be a handful under stress.

When not in Track or Sport mode, it mostly feels like what you’d expect an all-wheel-drive big box Charger Hellcat to feel like, if such a thing existed. But also much like your everyday Durango, there’s sufficient comfort; and enough luxury features for passenger pampering, as it remains an amazingly comfortable highway cruiser.

It also feels nimbler on the highway than classic Detroit SUVs like the Chevrolet Tahoe, and new Ford Expedition; and somehow more European as as well in the way it soaks up bumps with little fuss.

There is an aggressive exhaust note, but even it backs off the noise, when you back off the throttle; quite civilized indeed. 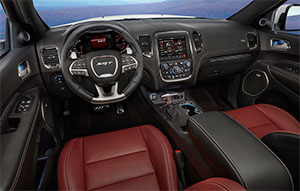 There’s plenty of room inside for hauling cargo, or a few understanding friends not opposed to whiplash; and perhaps most impressively, it still tows 8,700-lbs.

For hauling of a different sort; dial in your preferred launch RPM, step firmly on the brake, engage launch control, floor the accelerator, then release said brake. If the stars align correctly, you’ll jump off the line, and be at 60 before you know it, or 4.5–seconds in our case.

Somehow, it manages to handle all of that power going to all four wheels quite easily, staying amazingly smooth for the whole ¼-mile. Shifts are fast and aggressive, accompanied by a nice throaty pop from the exhaust. We cleared the ¼ in 13.0-seconds flat, travelling 104 miles-per-hour.

Inside, they’ve done a great job of keeping the 3-row, 6-passenger interior current even though the basic architecture has been around since 2011. No complaints about the Uconnect multimedia system as usual, and the steering wheel is chocked full of fingertip controls. 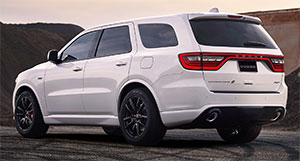 Amazingly, it really wasn’t that long ago, that we were wondering whether the Durango was going to be around or not. And now, not only are SUVs back, but they’re turning into exciting performance machines like this one.

But, poor Government Fuel Economy Ratings are the nature of this beast; 13-City, 19-Highway, and 15-Combined, which we matched exactly, on Premium fuel. That’s a very poor Energy Impact Score of 22.0-barrels of oil burned yearly with 9.7-tons of CO2 emissions.

Now, you could spend $31,090 on a base Durango and perfectly enjoy it; or you could say the heck with that, and drop $64,090 on this Durango SRT. You probably won’t regret either choice, but one of them would be a whole lot more fun, and even a much more sensible answer to the Grand Cherokee Trackhawk.

In fact, most of us here, would prefer the 2018 Dodge Durango SRT over Jeep’s Trackhawk. It’s just a better all-around cruiser with more than enough power, as well as plenty of practicality; a true sleeper for sure, and further proof that Dodge just doesn’t do boring.