Quite often car names are very descriptive of the hardware they adorn; like Pathfinder, Land Cruiser, or Demon. But none have been more spot on to us than the Ferrari 812 Superfast. No beating around the bush. This is one fast Ferrari, ready to race into the hearts and souls of the Ferrari faithful everywhere!

Ferrari’s 70-years of making V12 engines, has culminated in this, the 2018 Ferrari 812 Superfast. It replaces the F12 in their lineup; or more realistically, the 812 is an evolution of it, as it does share most of the F12’s aluminum architecture.

Despite the carryover bones, there’s lots new to talk about. Starting with the V12 itself. Now displacing 6.5-liters, it rates a whopping 789-horsepower and 530 lb-ft. of torque. Yes, it sounds glorious revving its way to its 8,900 RPM redline, and of course 0-60 is under three seconds. Still naturally aspirated, and rear-wheel-drive only, for an almost a throwback feel.

Transmission is a rear-mounted 7-speed DCT, that works with an electronic differential and a rear–wheel steering system. 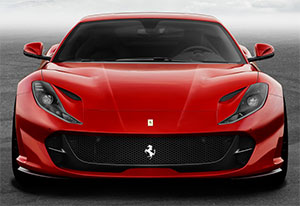 Speaking of changing directions, this is the first Ferrari to gain electric-assist front power steering. Combined with the rear, steering response is quick, almost instant, but like most such systems, it’s gives up road feel in the process.

But, other than that, we found the 812 to be slightly sharper, and better in every regard. Despite all of the power, it never seems to overwhelm the chassis. Weight comes in at under 3,600-lbs.; yet somehow, even with a huge V12 up front, it feels much lighter than that.

It’s not really a GT car, it’s much too serious for that, think of it more of a comfy, front-engine racer that you can drive civilized every day.

Indeed, since it’s not quite a true track car either, Ferrari engineers went to great lengths to make sure that every owner can fully experience all that this car has to offer. They’ve indeed made it easy to drive, and electronic helpers such as stability control work pretty seamlessly in the background.

If you do by chance, take in a track day, you’ll find oodles of grip and very little body roll, but none of the harshness that usually accompanies an exotic. 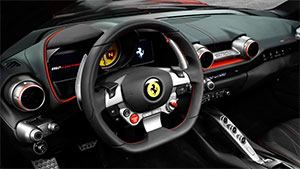 As we expected, power never lets up. It keeps piling on until you run out of road or come to grips your mortality. Yet, heading home on the interstate, it reverts to a new definition of supercar smooth.

It’s an Italian beauty for sure. There are no big wings or spoilers to disturb the shape. But there are certainly plenty of air-diverting pieces to this body puzzle, keeping it from being a perfectly curved form. A roomier cockpit does help to complete the flow, from the extra-long and low V12-holding front end, to the tall rear. But, step back and you have a car with character that is still purposefully gorgeous to the extreme!

Interior fit-and-finish is easily the best we’ve seen from the prancing horse folks. And they’ve finally gotten serious about delivering a multimedia system worthy of what buyers in this price bracket expect.

Gauges are easier to read than before, providing a wealth of information on the dual TFT screens on either side of the large central tach, which is now backlit. 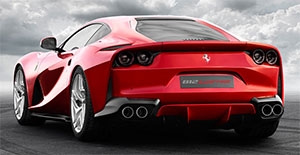 On the passenger side dash is room for an optional, changeable display that is barely noticeable until it lights up.

Just about every manual control you need is readily accessible on the steering wheel. Now it may look a little cluttered, but it all works really well.

Even more practical, the seats are impressively comfortable, visibility is improved all around, and there’s even 17.6 cubic-ft. of cargo space beneath the rear hatch.

On the other hand, Government Fuel Economy Ratings are 12-City, 16-Highway, and 13-Combined.

And, while it’s not the most expensive Ferrari you can buy, it is at the top end of the wish list, starting at $339,025; though with markups and options, most are going for over 400 G’s.

Ferraris truly are the things car enthusiast dreams are made of; and with the 2018 812 Superfast, there’s no false advertising here. Eventually, Ferrari will no longer be able to continuously one-up themselves, but that day is not today. The 812 is clearly superior to the F12, and it’s all wrapped in a stunning performance package the way only Italians can deliver it. Super-fast, Super-awesome, and we super want one!