Ford recently made headlines with a new strategy that will eventually eliminate all of their familiar family sedans. A big reason for that, are vehicles like this new Ecosport crossover. Yes, utilities are not only the new family car; they’re the new everything car. So, let’s take a look at Ford’s bold vision with their smallest crossover yet.

Usually, Ford is right on top of automotive trends. But, it has taken until now for this 2018 EcoSport to give them a subcompact crossover. At least here in the U.S., as the rest of the world has been driving EcoSports for about 15-years now.

And it doesn’t take much time behind the wheel to know that this EcoSport was not originally intended to please American tastes. There’s no way around it, the ride is rough; but there is also a European sportiness to it. We enjoyed driving it as much as spirited handlers like the Mazda CX-3. And that’s with a relatively high ground clearance of 7.8-inches.

It also feels narrow inside; almost like a smart car, where you’re just about rubbing shoulders with your front passenger.

The upside of that, is that all controls, including the tablet-like screen at the top of the dash, are within easy reach.

Front seats are also narrow and have significant bolstering, even in the bottom cushion.

Elsewhere inside, it’s a nicely modern space, and there are very good materials for an entry ute; as well as plenty of storage options.

Rear seat room is just adequate for even small adults; and entry is a little tight.

We haven’t seen this in a while. Accessing the cargo bay requires swinging the door to the side, and we don’t really mind it; at least it opens to the left so you can load from the curb side. 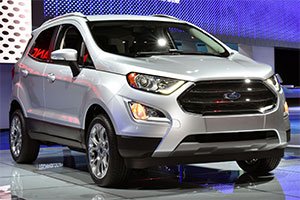 20.9 cubic-ft. Rear seats require an old-school flipping up of the seat bottoms to get everything flat; not quite the flexibility you’d find in the Honda HR-V, but a good 50.0 cubic-ft. of space is the result.

As far as subcompact crossovers go, the EcoSport is a very stylish one, with a bottom-heavy, rounded shape that is consistent with its playful persona.

At our test track the “sport” part of our all-wheel-drive EcoSport does shine through; it’s a fun little ute, providing you don’t push it too hard. It doesn’t feel top heavy at all, and you can get both under and oversteer out of it.

Braking performance was only reasonable.120 feet from 60 to 0 was our average.

Now, we’ve made it this far without talking about the engine. The base unit is a small 1.0-liter 3-cylinder turbo, and we were kind of looking forward to seeing how well it moved this little ute around.

But, Ford sent us an all-wheel-driver which required an upgrade to the 2.0-liter I4, which we liked just fine; but at 166-horsepower and 149 lb-ft. of torque, it’s no EcoBoost. 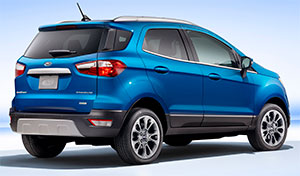 After a quick tire chirp off the line, there’s a disappointing delay for real power; which happens at almost exactly the same time that a shift is triggered in the 6-speed automatic transmission. It took a long 10.0-seconds to hit 60, and 17.4 to complete the ¼-mile at 76 miles-per-hour. Yawn!

As for the eco part of the 2.0-liter all-wheel-drive EcoSport, it’s unremarkable. Government Fuel Economy Ratings are 23-City, 29-Highway, and 25-Combined. Yet, we did average a decent 27.3 miles-per-gallon of Regular. The Energy Impact Score is 13.2-barrels of yearly oil use with 5.8-tons of CO2 emissions.

While the 2018 Ford EcoSport was not originally designed with us in mind, we still think it’s a reasonable first entry into America’s growing tiny-ute market. It’s very modern, handles great, and has loads of cargo space for its small footprint. Plus, if this is a preview of what Ford has in store as their small sedans go away, they just might have a better idea after all.