With the reborn Explorer and a host of other uni-body crossovers in their lineup, it’s easy to forget that Ford still make a big body-on-frame SUV…the Expedition. It’s been around for three generations now, and an all-new fourth gen Expedition delivers the biggest change yet, joining the F150 with an all-aluminum body. So, let’s see if lighter is righter.

Even in a utility world gone crossover, there are still plenty of people that need a big, truck-based SUV like this 2018 Ford Expedition. But, we’ve covered all of that before. So, what improvements does this all-new Expedition offer the power-hungry, trailer-towing, family-hauling utility buyer?

Well for starters, not only is styling more modern; but like the F150 it shares its basic full frame design with, body panels are now made of aluminum. That helps to shave off about 300-lbs. of weight.

But rather than with the F-150, the face of the full-size Expedition is more akin to the mid-size Explorer; while body sides are not quite as rounded as before, with a less obvious greenhouse. Indeed, from a distance, it appears very similar to its biggest competitor, the segment dominating Chevrolet Tahoe. 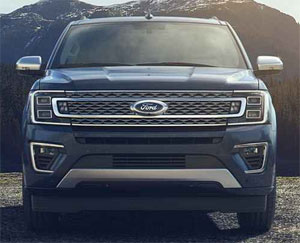 Expedition wheelbase is 122.5-inches, about 3½ more than before. And yes, a longer wheelbase Suburban fighter is available as well, at 131.6-inches, now known as the Expedition MAX.

Cargo capacity is up; now 20.9 cubic-ft. behind the standard 3rd row, 63.6 behind the 2nd, and 104.6 with all seats folded. Perfect for late night Walmart runs. 7 or 8 passenger seating is available, with 2nd row getting a new tip-and-slide function.

Thanks to the longer wheelbase, space is more plentiful all around, beating Tahoe in second row legroom by over 2 1/2 inches. There are ample options for plugging in, and you can even live stream satellite or cable TV to the entertainment system.

Platinum trim is tops for now, with materials fitting the name. But the bulk of volume will be made up by mid-level Limited; which includes a power folding 3rd row, heated seats for 1st and 2nd rows, as well as a heated steering wheel.

Gauges are very similar to the F150’s with a mix of analog with virtual gauges, along with a wide, configurable TFT display. 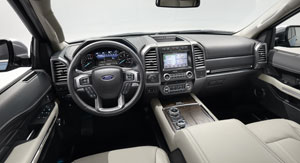 Attached, is Ford and GM’s joint venture 10-speed automatic transmission; which allows for better power at launch, as well as lower cruising RPM on the high end, for improved efficiency. It’s one of the best modern automatics we’ve sampled; finding the right gear quickly without searching around like most rival’s 9-speeds we’ve driven.

Maximum towing capacity is 9,300-lbs., significantly more than the Tahoe’s 8,600; and by far best-in-class. The F150’s Pro Trailer Backup Assist is available as well.

The optional 4-wheel drive system comes with an updated version of Ford’s Terrain management system with up to 7-different drive modes, for helping you through just about any situation you may find yourself in.

There’s also an available FX4 Off-Road Package. And while it isn’t quite Raptor-spec, you do get an automatic limited-slip rear, off road shocks, 7-skid plates, and 18-inch wheels with A/Ts, for when you leave the trailer behind and venture further off the beaten path.

The independent front suspension is virtually identical to the F150’s, while in back there’s an updated version of the outgoing Expedition’s multi-link setup rather than a solid axle.

Ford has gone to great lengths to quiet the interior down, and it is indeed very calm inside; and without a doubt, road manners have improved greatly thanks to continuously controlled damping. But despite the weight loss and myriad of updates, it’s still hard to disguise the fact that this is a very big truck-like vehicle, and continues to ride and drive like a one.

And while there are certainly a few people out there that prefer that in their utility; the fact that very few body-on-frame SUVs remain, while crossovers have taken over the segment, would suggest that the majority of people don’t.

Thanks to that 10-speed automatic, Government Fuel Economy Ratings for a 4X4 Expedition are 17-City, 22-Highway, and 19-Combined; that’s up from 17-Combined last year. It still has a poor Energy Impact Score though, at 17.3-barrels of annual oil consumption with CO2 emissions of 7.7-tons.

There’s no way around it, you’ve got to pay to play in this segment. Pricing starts at $52,890. Adding 4-wheel-drive varies with trim level, but adds about $3,000 more. So, you’re looking at around $75,000 for top Platinum trim, even more if you opt for the Lincoln Navigator variants.

So for 2018, the highly-evolved Ford Expedition improves in every possible way; whether you’re talking capability, interior space, fuel economy, and certainly style. Ford fans will love what they see, and no doubt this Expedition will create a few more fanatics for the brand as well.