It’s an awfully bold decision to simply name your car GT. But of course it’s not new to Ford, having been around this track once before. But while this ’05 was built as an homage to the original GT40 race car, there’s a new GT that’s built with a whole lot more in mind.

This latest Ford GT, was developed not only to celebrate the 50th anniversary of the original GT40’s 1966 triumph of Le Mans, but to return to the scene and do it all over again. And since engineers didn’t get the go-ahead until very late in the game, there wasn’t time for developing separate race and street cars. So essentially, what you and I can buy today, is very close to what claimed victory in the GTE Pro class at Le Mans in the summer of 2016. 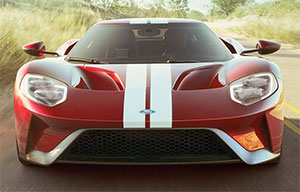 It appears that making the Mustang more “Euro” and bringing European-tuned RS models to the U.S., were just the first steps in a whole new performance era for Ford. This carbon-fiber tubbed, rear-drive, active-aero enhanced, mid-engine, twin-turbo powered missile is a true global supercar in every sense of the word.

And while a lot of things have changed in the automotive world since the 1960s, there’s no doubt that the 1,000 GTs that Ford plans on building, will be cherished every bit as much as the original GT40s, should they make it to 50-years from now.

Behind the wheel, it’s not quite as daily driver friendly as say a Lamborghini Huracan, Audi R8, or even McLaren’s latest; and we’re fine with that. This thing screams all-out performance from the moment you lay eyes on it.

Experiencing the GT on public roads, is truly a transformational experience. It feels fast, flat, and smooth; quickly making a blur of the scenery, while encouraging you to keep pushing. We picked our test car up in L.A., and quickly headed way out of town.

DAVE SCRIVENER: “From interstate cruising, to rush hour traffic, to carving up mountain roads like I am now, I’ve spent several hours behind the wheel of the Ford GT, and I can’t find a weak spot in its game anywhere.”

JOHN DAVIS: The track-ready suspension setup features a short-long arm design with inboard springs and dampers. It helps the GT remain serene and focused at high speeds. Top speed is listed at 216 miles-per-hour by the way; the first 60 of which, it covers in 3.0-seconds.

25 individual computing systems receive information from 50 different sensors in the vehicle, to deliver the most comprehensive drive mode system we’ve seen yet. Your options are Normal, Sport, Wet, and of course Track; which will easily have you chasing down Ferraris at that exclusive high-dollar track day we all dream about. 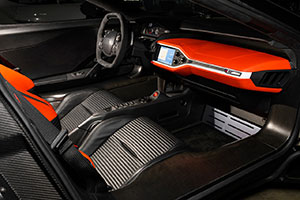 Ergonomics inside are more race car than street car. The driver’s seat is fixed, but a sliding pedal box, as well as fully adjustable steering column help get you situated.

Controls for just about everything are on the steering wheel itself, while just behind it, is a comprehensive all-digital gauge display. Hitting the start button, results in quite a commotion of ecoboosted clamor behind you.

It’s from a twin-turbo 3.5-liter V6, very similar to the one that now powers the Ford Raptor pickup. Only here, it whips ups 647-horsepower and 550 lb-ft. of torque.

Attached, to a 7-speed dual-clutch transmission, controlled by a simple knob on the console and paddle shifters mounted on the steering wheel.

That’s right, no V8; but in addition to the weight savings that comes from a smaller engine, the V6 allowed Ford engineers to taper the fuselage more efficiently and improve aerodynamics. 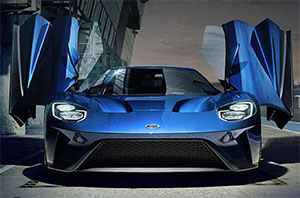 And make no mistake, like any supercar, it’s all about using the wind to your advantage. Front air ducts, as well as the large rear wing, are all active; creating max downforce in all driving conditions.

GT pricing escalates rapidly from its $450,000 start. And, despite not being that rare; Ford plans on building 250 a year for a 4 year run; the first one allowed at auction sold for 5 times its MSRP.

Built for the track, but ready for the street and a very nice garage, the 2018 Ford GT is a magnificent performance machine. It had no problem returning the Blue Oval boys to victory lane at Le Mans its first time out, and won over our hearts and minds just as quickly.