When it comes to performance cars and muscle cars, as they say, if you’re not moving forward, you’re probably falling behind. Ford is definitely moving forward with their Mustang. It gets a host of updates for ’18, many of them our favorite kind, ones that make it gallop faster!

The 6th gen Mustang has only been on the street for 3-years, but Ford felt it was already in need of tweaking. So, how do you make a great pony car greater? Well we’ve come to Roebling Road Raceway near Savannah, Georgia in this 2018 Ford Mustang GT to find out.

Mechanical changes start with more beef from the 5.0-liter. Now pushing 460-ponies out of its slightly enlarged 8-cylinders, and revving higher than ever, to whip up 420 lb-ft. of torque. And there’s a new 6-speed manual transmission to handle the extra force, aided by a new twin disc clutch.

For those that are not into selecting their own gears, a 10-speed automatic transmission is now available as well. 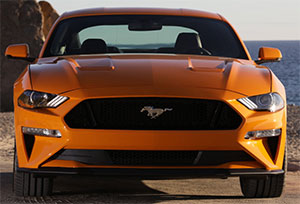 But, no thanks, it’s the manual for us. Working it and the pedals, will get you a 0-60 run of 4.5–seconds. A new Drag Mode helps you get the most out of it, especially if you do opt for the 10-speed automatic, which Ford claims is even quicker. Oh well, line-lock is now standard on all ‘stangs not just the GT, if you’re more into making smoke than haste.

Ripping through the gears is a pure delight. The new trans combined with great pedal placement, makes for quick work of it. And once a ¼-mile’s worth of Georgia asphalt had passed, we were at 115 miles-per-hour; after 12.4-seconds.

The exhaust note pouring out is better than ever, thanks to an optional Active Valve Performance Exhaust system. That’s good news to our ears, but if you think your neighbors might complain, you can engage a new quiet start mode.

GT Performance Packs are back. Our car had Level One. But, also added the new Level’s Two’s game-changing MagnaRide shocks. Similar to what’s fitted on the Chevy Camaro SS 1LE, this active system takes a multitude of things into consideration, including even ambient temperature, and adjusts accordingly. There’s also a new cross-axis joint rear suspension; and just for good measure, four Michelin Pilot Sport 4 S’s on 19-inch wheels.

Whether it’s those tires, the shocks, or the suspension setup, this 5.0 truly does feel nimbler around a road course; and without a doubt, there is more grip to exploit. 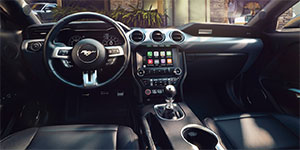 Transmission gearing has been changed and seems perfect for this track; while the Performance Pack’s Brembo brakes were phenomenal, far above what we’ve experienced in a basic GT Mustang.

This car feels great, fitting right in with just about any track worthy car you can think of. And it could even raise a few rival fans opinions on the Mustang.

This GT is precision balanced; much like the 2008 Mustang Bullitt we loved; though here there is enough power to induce some oversteer if you want, and those Michelin’s did take a bit of time to get heated up.

But for all of its on-track prowess, this GT Level 1 remains a very approachable, easy to live with car, that’s a breeze to operate whether cruising around town or on the open highway.

Other newness comes in the way of a 12-inch digital LCD customizable digital dash display.

Elsewhere inside, there’s more stitching throughout, a new pulsing start button ready to set everything off, and even a first time heated steering wheel. Finally, there’s updated SYNC Connect for the height of connectivity.

Safety systems are updated as well, with Mustang now getting Automatic Emergency Braking.

Government Fuel Economy Ratings for a GT manual are 15-City, 25-Highway, and 18-Combined.

But just a reminder, base ‘stang’, using a base EcoBoost I4; the V6 is history; gets a lot of the same improvements and is actually cheaper than last year at $26,485.

As pony cars continue to battle it out, streaking down the front stretch towards a finish line that may never be reached, more technology and more performance are being added continuously.

Regardless, the 2018 Ford Mustang will succeed by doing what’s important to the Mustang faithful first. Being, unmistakably, a Mustang. It may not be the fastest muscle car out there; but it has no glaring flaws, and is without a doubt the best total package.