You don’t have to watch too much TV and video, to get the word that GMC builds “professional grade” trucks and SUVs. What does that mean exactly? Especially in a world of car-based crossover utilities? Well, when most people think of professional…or commercial trucking, diesel engines come to mind. So, let’s find out if the new terrain diesel compact utility is really for the pros.

By calling its lineup “professional grade”, GMC is going for rugged yet refined; the proverbial “brute in a suit”. Well, the original front-wheel-drive based, 2-row GMC Terrain wasn’t much of a brute, and its suit wasn’t exactly Savile Row either. But, that’s changing with the all-new 20-18 Terrain.

We can quickly say it’s a greatly improved vehicle. It also has even more differentiation from the mechanically similar Chevrolet Equinox, both outside and in. We bet your Equinox owning neighbor won’t realize they share the same platform.

Powering the Terrain’s upscale transformation is a trio of available turbo engines; no more naturally aspirated 2.4-liter I4 or 3.6-liter V6. Base now, is a 170-horsepower 1.5-liter I4 turbo. Need more? Add ½ a liter of displacement, and get 252-horsepower from a 2.0-liter turbo. Both with a new 9-speed automatic. 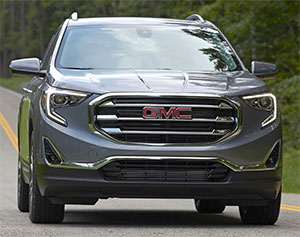 But our test model has the most intriguing new engine option, a 1.6-liter 4-cylinder turbo-diesel with 137-horsepower and 240 lb-ft. of torque. It’s clearly aimed at improving fuel economy only, as ironically enough, it’s the 2.0-liter gas that has the best towing capacity at a respectable 3,500-lbs.

The diesels transmission is a 6-speed automatic. With that, Government Fuel Economy Ratings for an all-wheel-drive diesel are 28-City, 38-Highway, and 32-Combined. We clattered our way to a quite good 34.0 miles-per-gallon. For a slightly better than average Energy Impact Score of 11.9-barrels of oil consumed annually, with 5.3-tons of CO2 emissions.

All powertrains have to endure an eShifter that is now a “why on earth?” row of buttons and switches along the center stack bottom. GMC says a traditional looking shifter takes up too much console space. We say, ugh!

Highlighting the otherwise very stylish interior is either a 7 or 8-inch well integrated touchscreen. GMC’s fine infotainment unit has gotten quite intuitive; though some found the symbols a little too cartoonish for this “professional grade” rig.

Seat comfort is also good, some switchgear is familiar, but otherwise, much more premium in feel than Equinox.Very nice materials should also help lure luxury pretenders, including genuine aluminum trim; along with features like active noise cancelling, Traction Select system, keyless entry, and other items not typically standard in the segment. 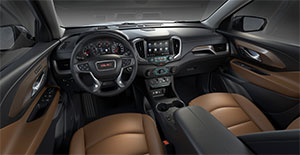 It’s also one of the few vehicles that still has a fold flat front passenger seat as well, for hauling longer items. Traditional cargo space starts with 29.6 cubic-ft. behind the rear seats, maxing out at 63.3 with them folded.

Ride quality is quite smooth for a compact crossover, but the cabin is nowhere near as quiet as you’d find in the slightly larger Buick Envision. Clatter from the little diesel itself, is fairly subdued, even outside. Yet it does run a little rough, not quite as refined as most European diesels. But, the Terrain certainly looks the premium part.

It’s the most handsome rig in GMC’s lineup as far as we’re concerned. Yes, the front end is big and bold, but there’s a slickness to it, that keeps it from being too “in your face”. Admittedly, they are arriving late to the floating roof party, but their take on the theme is very well done.

Not too many diesels are designed with ¼-mile times in mind, so it’s no surprise that this Terrain diesel takes a leisurely 9.9-second stroll to 60. The low-end torque you expect at launch, is there in spades. But we’re just dealing with 1.6-liters here, so it quickly runs out of steam; puttering its way down the track, with lazy but smooth shifts from the transmission.

¼-mile time was 17.5-seconds at 77 miles-per-hour. The Terrain is a braking pro, for sure. Stops from 60 averaged a short 105-feet, with little to no fade and great stability.

While we still don’t consider the 2018 GMC Terrain, even with a frugal diesel, as “professional grade” as its Yukon and Sierra stablemates, designers have done an excellent job. It’s a vastly better package. Plus, Terrain’s personality is now totally unique from the mass-market Equinox. So, you don’t have to be any kind of a “pro” to figure that out, or to enjoy this fine, very useful, premium compact crossover.