An accord by definition is an agreement. And I think we can all agree that the Honda Accord has been one of the most successful cars of all time, with over 13 million sold here in the U.S. alone. So while an all-new Accord may not spike the excitement meter around here, it certainly is an important vehicle for Honda, as well as for other car makers, as they see what they’ll be up against for years to come.

Sedan sales being what they are these days, you might think Honda would just do a light makeover for the 2018 Honda Accord and call it a year. That’s not the case.

This 10th generation Accord is all-new, riding on a lighter chassis that allows for a lower, wider stance.

Wheelbase is up by over two inches, with virtually all of it upping rear leg roof. There’s genuine full-size sedan space back here, and while the sloping room means really bending over to get in, there’s 6-footer-plus headroom once you do.

Up front, Honda has blended a sportier theme into the familiar space; starting with a nicely thick steering wheel, and adding additional bolstering to the seats. 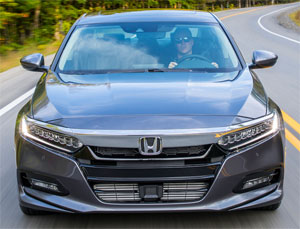 The gauge panel is virtual, but there are dials here, not just a digital readout for speed like some other Hondas.

A full slate of tech. features naturally, including an 8-inch touchscreen with vastly improved interface; though that’s mostly due to adding some antiquated knobs and buttons back into the mix.

On the practicality front, split folding seatbacks are standard, and trunk space increases by almost a full cubic-ft. to 16.7.

There’s lots new in the powertrain department as well. Base, and destined to be the most popular, is a 1.5-liter turbo-4, which at 192-horsepower, is the most ever standard in an Accord; torque is 192 lb-ft. It comes mated to either a CVT or a 6-speed manual transmission. For a small turbo, it operates very smoothly, and feels totally adequate for daily use.

The upgrade is no longer a V6, but another turbo-4, a 2.0-liter no less. But don’t fret, it’s actually a detuned version of the Civic Type R’s, cranking out 252-horsepower, with 273 lb-ft. of torque, more than the last V6. It connects to either a new 10-speed automatic or a 6-speed manual.

We really enjoyed the manual. It’s not Honda’s best shifter ever, but it just feels like you’re getting away with something, rowing through the gears in this family car. 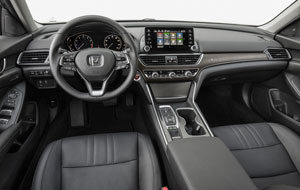 Finally, the hybrid makes a return as well, combining a normally-aspirated 2.0-liter I4 with two electric motors for a combined output of 212-horsepower.

Regardless of powertrain, the Accord feels as quiet and functional as always, but bigger, and still with just a dash of fun in the mix. It’s not Lexus quiet, or Mazda capable, but it finds a really nice sweet spot in between.

While visibility wasn’t an issue before, A-pillars have been slimmed to enhance the outward view further.

Despite the wheelbase stretch, overall length is actually down, even as the front overhang is up slightly.

A bit of weight was lost along the way as well, around 150-lbs for most trim levels. Wheels are 17 or 19-inch alloys.

Most of our time, both at the national press launch in New Hampshire and around our headquarters, was spent in a Touring trim Accord with the optional 2.0-liter and 10-speed automatic. New is an Adaptive Damper system with real-time damping control with Normal and Sport modes.

Despite all of the gears, the transmission displayed only the occasional clunkiness.

And at our unfortunately frigid test track, the 2.0T-10 speed combo still delivered; with a 0-60 of 6.5-seconds. There’s plenty of low-end rumble, enough to battle quite a bit of wheel spin. With warmer temps, we feel sub-6 seconds would be more the order of the day.

Things are smooth and steady from there, eventually tripping the lights in 14.8-seconds at 100 miles-per-hour. Easily comparable to last year’s V6.

It doesn’t feel vastly lighter than before, but nimbler for sure with noticeably less body roll. Turn-ins are quicker and overall the car simply feels more responsive, and yes sportier!

Honda Sensing safety systems, including Collision Mitigation Braking are standard on all Accords.

Government Fuel Economy Ratings aren’t finalized for the 2.0-liter, but in mixed driving we averaged a good 28.6 miles-per-gallon on Regular.

Yes, it’s not a great time to be in the 4-door car business these days; but if there’s one sedan that should have no problem staying relevant in this SUV obsessed world, it’s the 2018 Honda Accord. It’s because it still delivers what it always has; reliable, highly efficient, practical, trouble-free transportation in an increasingly refined and sophisticated package. Honda fans are sure to follow… Accordingly.