Honda didn’t invent the minivan, they just made it a whole lot better. Indeed, the Odyssey has come a long way in 5-generations; from its beginnings as a modest Asian style, 5-door people mover, to the cavernous sliding door American staple it is today. How did they do it? By asking families what they want, and then giving them more than they expect. And for 2018, they’ve done it again.

Honda has a knack for solving problems we didn’t even know we had; making buyers say “Wow.” Like the new Cabin Watch camera for monitoring the back seats; and Cabin Talk that allows you to pipe public address announcements through every speaker including headphones.

BEN DAVIS: “Hey what do you kids want on these nuggets”?

JOHN DAVIS: And best not to let your younger ones access to the Cabin Control app, as your car may never be the same. 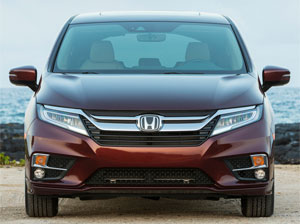 Lots of additional sound deadening has gone a long way to eliminating typical minivan booming noises, even when the all seats are stowed or removed. It adds to an ultra-smooth ride quality, one that makes the Odyssey feel more like a quiet and sophisticated luxury car than just two-box family transport.

There’s a higher style exterior that is still far from beautiful. Yet, we’re glad Honda avoided making it boring.

Last gen’s “lightning bolt” is gone, though there’s still a slight dip in body-side sheetmetal. And it seems to have been joined by a hockey stick shaped floating roof.

Inside, there’s comfort for living, as well as flexibility, no crossover can touch. Particularly when it comes to the 2nd row. The new sideways Magic Slide feature allows you to get around the cabin with ease. And, it all operates with buttery smoothness.

Empty nesters that use their minivan for oversize cargo more than for an oversize family, will find that Honda still has no response to the Chrysler Pacifica’s Stow n’ Go 2nd row versatility, and neither is the floor completely flat. 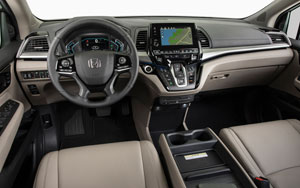 Top level Elite trim is feature packed, going toe-to-toe with the Pacifica Limited; most of those features with families in mind, including storage cubbies everywhere. The Odyssey has optional LTE Wi-Fi for streaming movies with one ceiling mounted screen, and all but the base LX has Apple CarPlay and Android Auto.

The Odyssey’s new infotainment interface is nice, featuring a large, very responsive touchscreen. But it still takes way too many touches to do simple tasks like tuning the radio.

Some also found the high-mounted screen a little distracting; so we still prefer the Pacifica’s lower placed UConnect. Fortunately, in Odyssey, there are still plenty of manual controls, and the A/C blower remains very quiet even cranking at full blast.

Powertrain is another check in the win column for Honda. Still powered by a 3.5-liter V6, it has been upgraded with Earth Dreams technology. Horsepower climbs 32 to 280, while torque jumps 12 lb-ft. to 262. 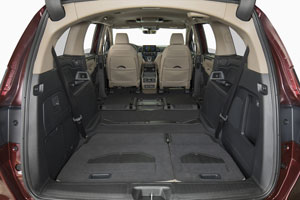 Further newness comes by way of a 10-speed automatic transmission that is available only in Touring and Elite trims.

Together, they deliver a much smoother experience than any rival minivan. All other trims have one gear less.

Our Elite got us to 60 almost a half second quicker than before at 7.6-seconds. There’s plenty of potency off the line. The engine sounds strong, and the 10-speed delivered smooth, quick shifts as we finished the 1/4 mile in 16.0-seconds flat at 91 miles-per-hour.

Government Fuel Economy Ratings with the 10-speed come in at 19-City, 28-Highway, and 22-Combined. That’s, mostly the same as last year, just one better mpg on the highway. We averaged a good 23.4 miles-per-gallon on Regular. For an average Energy Impact Score of 15.0-barrels of annual oil consumption and 6.5-tons of tailpipe CO2.

Pricing starts at $30,930. But for all the Elite’s bells and whistles, you’re looking at a hefty $47,610. Most Odysseys will transact somewhere in between the two.

The 2018 Honda Odyssey probably won’t change back seat queries of “are we there yet?” to “what, we’re there already?” but it will make both family vacations and daily life more pleasant. And that’s what’s really important. When it comes to everyday practicality, it’s still hard to beat the humble minivan; and with the new Odyssey, finding a great one is now easier than ever.