If your first SUV becomes a huge success, logic would declare you should hurry up and pump out another one as soon as possible. Well, indeed there is a second Jaguar SUV, as they’ve followed up the midsize f-pace with a compact e-pace. But, don’t think of it as a hastily assembled “me too”, but rather the artfully done next phase of the plan for the new jaguar.

It doesn’t matter how long your brand has been around, or what you’ve been about in the past; these days, the more SUVs you have in your lineup, the better. Thus, we have Jaguar’s encore utility, the 2018 E-PACE.

There are many things that surprise about Jag’s new compact entry. Chief of which, is that due to it being based on the Range Rover Evoque’s D8 architecture, it’s actually heavier than the mostly aluminum midsize F-PACE.  So, there’s a very solid feel when prowling the curves in this little runabout.

Thus it’s no surprise, that it shares the Evoque’s 2.0-liter turbo I4; though Jaguar has done some updating, and there are actually two different versions. Base models see a 246-horsepower form; while R-Dynamics dons 296-horsepower with 295 lb-ft. of torque. The increased power largely due to just spinning up the turbos a little more. 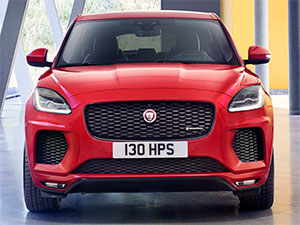 Transmission for both, is a 9-speed automatic. There are also two different all-wheel-drive setups. The base system operates with a mostly 50/50 split of power, and can send more to the front or rear when slip is detected.

We didn’t get any serious off road time, but with Land Rover bones, you know it’s plenty capable; and what little that we did explore, it feels very substantial and SUV like, not car-based crossover fragile.

The optional Active Driveline operates in mostly front-wheel-drive, but responds quicker when shifting the power around. It allows for full-rear-drive operation, with a pair of wet plate clutches sending all power to one rear wheel when needed. So, this cub can be fun under right circumstances, greatly aiding in handling; and of course there are lots of electronics keeping things happening in sync.

Our R-Dynamic tester felt quite good through the cones, once we got a feel for the very light and ambiguous steering, as well as the power struggle that exists between the front and rear wheels as they battle it out for superiority. It’s no BMW X3, feeling a little softer and heavier by comparison; but still on the fun side of things, thanks to a suspension design that’s similar to the F-PACE’s. 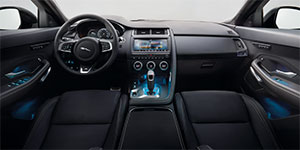 And, in addition to the typical choice of drive modes, you can get quite deep into individual adjustments of throttle response, transmission shifting, and steering; provided you have the time, and stumble across the right menus.

Despite boasting the more powerful version of the 2.0-liter turbo, we didn’t find anything particularly thrilling about straight-line acceleration. There’s solid grip at launch; but overall, power is slow to arrive. We arrived at 60 in 6.9-seconds and at the end of the ¼-mile in 15.3 at 88 miles-per-hour.

There’s a lot of engine noise; and while it not overly rough, it’s not exactly the most pleasing of mechanical sounds either.

Now, what is totally pleasing, is the E-PACE’s aggressively shaped sheet metal.

There is some resemblance to the F-PACE; but where Jag’s larger ute is rounded and muscular, this one is more angular, and appears designed more to get as much room inside as possible. And very successfully, we might add. 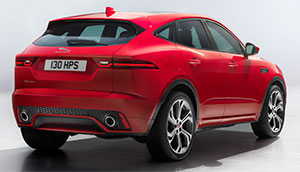 All seating positions boast lots of space, including in the rear.

Cargo space is also quite good for the class; 24.2 cubic-ft. with the seats up, and 52.7 cubic-ft. with them folded. Between the Touch Pro infotainment system, and the large 12.3-inch TFT instrument cluster, you’ll get plenty of screen time in the E-PACE; and even an available Head-Up display if you’re trying to minimize it.

Government Fuel Economy Ratings are 21-City, 27-Highway, and 23-Combined. So, our 23.1 miles-per-gallon average of Premium was right on. That’s an average Energy Impact Score though, 14.3-barrels of yearly oil consumption and 6.3-tons of CO2 emissions.

It’s hard to say what Jaguar’s legacy will ultimately end up being. Going from the fabulous sports cars of the mid-20th century, through the questionable 1980 and 90s, to the full-on luxury-performance stable of today.

And, SUVs are sure to be a big part of the brand going forward. To us, the 2018 E-PACE is not quite as compelling as the spectacular F-PACE.  But, Jaguar has certainly picked up the pace, with an impressive lineup, all designed with the spirit of the F-type.